What started out as a Disney Park attraction has now become the latest action-packed adventure comic for everyone.

I've been to Disneyland many times. Big Thunder Mountain Railroad has always been a favorite ride. Despite the many times I've been on the roller coaster, I never really knew what the story was. You could tell it dealt with the Old West and mining was involved but what was up with that goat with the stick of dynamite in its mouth?

In the first issue of the comic based on the attraction, written by Dennis Hopeless, we're getting some answers about the attraction (yes, even the goat makes an appearance here). It's great to be able to read an all-ages comic that doesn't feel like it's been written just for kids. From the opening pages, you really get a feel for the Arizona Territory in 1878. Tigh Walker's art and Jean-Francois Beaulieu's colors captures the tone the story calls for. Whether it's an old locomotive, some tricky horse-riding maneuvering, as well as the clothing for the time period, it all feels right.

The story introduces us to Abigail Bullion. After her mother's death, she has to stay with her father, the man running the mining for gold at Big Thunder Mountain. As you would expect, she's a character full of energy and determination despite the place women were supposed to take in this time period. Soon, she gets involved in a dangerous situation that keeps the reader glued to each page.

There are a couple moments that are a little tongue in cheek. Some of the events occur at a bit of a rapid pace. There are some moments where the suspension of disbelief are tested but you just need to sit back and enjoy this introductory issue.

It's not often we see comics set in the Old West these days. BIG THUNDER MOUNTAIN RAILROAD delivers what you would want in a Western comic. It may be an "all-ages" comic but there is no shortage on the action or suspense. We're introduced to some interesting characters that will continue to grow as the series progresses. Dennis Hopless is fleshing out a story based on a Disney Park attraction with plenty of pure adventure at its core. The art and color add to the charm as well. With an interesting twist and cliffhanger at the end, it's a safe bet you'll want to come back for the next issue. If you're looking for a fun book filled filled with action and adventure, you'll want to hop on board this series.

I really enjoyed this book. It was simple but fun and def has the potential for a great story. I'm glad i gave the Disney Kingdom books a chance because all 3 (seekers, figment and now big thunder) have been quality titles.

that was good, I was entertained, nice, fast paced story 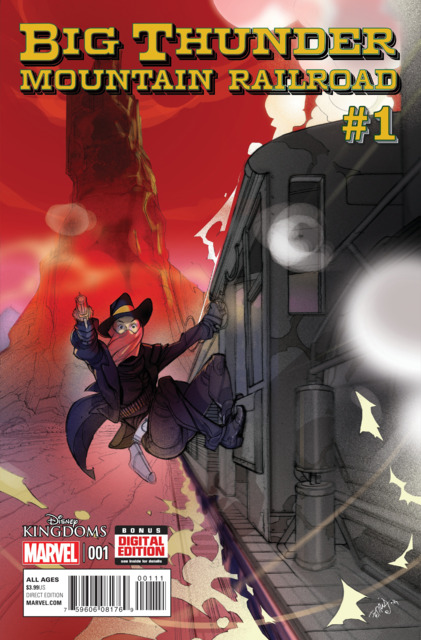