Anarky returns and manipulates Batman, Katana and even the League of Assassins in his latest plot.

Anarky is apparently going to serve as Batman's archenemy (makes sense since it's blatantly pointed out they're polar opposites), but unfortunately, his previous debut wasn't all that gripping and didn't leave too strong of an impression. The villain unleashes his second plot in 'Sacrifice' and thankfully, it makes him feel far more formidable.

Not only does the foe open with a great showing of hand-to-hand abilities, but his plot this time around is way more sinister and impressive. Sure, we all know it's rather unlikely the villains will actually destroy Gotham in animated show, but it's a commendable display of tactics as he aims to manipulated both the heroes and the League of Assassins. Moreover, what comes from this plot is super promising. They're finally introducing a big name villain and it'll be quite interesting to see how they incorporate this person into the mix. The first glimpse of said character makes their identity pretty obvious, but despite that, the final reveal was still totally exciting.

Right when the formula for the second half of the show starts feeling repetitive (run from Grundy-esque ninjas! Hack a new door!), they thankfully switch it up and that's when the episode really shines. There's some seriously badass moments, but more importantly, it's a great moment for Katana and shows how she's developing. Wayne has already lectured her on killing and in the last episode discussed her rage, but this episode reveals whether or not she's truly been taking all of that to heart. Oh, and does anyone else think there's something else to the CRC Executive Director? She felt totally wooden.

While there's a standout moment for Katana and the team did a solid job selling Anarky, I have a lot of small to moderate gripes with the episode. I'm a huge sucker for a good action scene and this episode cuts off some potentially great scenes way too soon. The standoff between Batman and the large foe was just oozing build up, then one short combo later and it's done. On hand hand, it's great seeing Batman rock so easily, but on the other hand, it felt like a missed shot at a "boss battle" kind of brawl.

I'm thrilled they're using Lady Shiva, but honestly, she's not nearly as formidable as she could be. It's a bit difficult to swallow her being a cunning and ruthless leader of this dangerous organization when she's quickly manipulated by two different characters, never firing back with her own alternative. "You can't bargain with me! Okay... sure, you can." Not to pile on their treatment of the character or anything, but it was also disappointing to see how swiftly she lost in her one-on-one with Batman. Don't get me wrong, this is yet another double-edged sword. Seeing Batman wreck someone so skilled is a treat, but at the same rate, if she's doing just fine when he's teamed up with Katana, how'd she do so poorly in the one-on-one? Not to mention she previously took one of Bruce's vicious punches to the face like it was nothing, then she's out of commission with a basic throw. It just feels inconsistent.

Batman seems to talk about important lessons at the most pressing times. Place burning down? Lecture on morals. Timer is dangerously low until the place goes kaboom? Explains why he came back and the two talk somewhat slowly about it. It's well-written, but doesn't exactly seem like the wisest time to discuss these things since time is of the essence. Lastly, unless it's Halloween (which it apparently isn't), it's tough to believe any guard saying, "May I help you, ma'am?" when someone as elaborate as Lady Shiva and two ninjas walk into a heavily secured facility holding all kinds of dangerous things.

'Sacrifice' does quite a few things right. There's some great bits of dialogue, it does a thorough job improving Anarky, has a cheerworthy ending, and most important of all, it's entertaining. Unfortunately, it's also bogged down by a whole lot of minor gripes, including missing the mark on potentially great action scenes and its treatment of Lady Shiva. It's by no means a bad episode (I consider 3 stars "okay") and if you've been following along, there's no good reason why you shouldn't check it out. In fact, it's strongly recommended you should simply because it appears to be the start of a far bigger narrative.

P.P.S. How awesome was that Deadman DC Nation short?!

Viners, what did you think of 'Sacrifice?' Speak your mind below or chat with Gregg about it via Twitter. 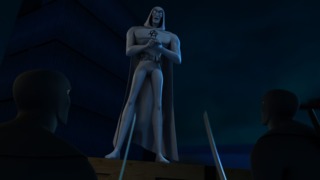