Batwoman has gone through some changes but have they taken a deadly turn?

There's been some concern with what Batwoman's fate would be since her series is coming to an end. The big twist was getting turned into a vampire by Nocturna. We saw it happen at the end of issue #34 which was followed by the FUTURES END story set five years in the future. When 35 came around, We didn't get a clear follow up to 34 as the story jumped forward a little (to what will happen in the upcoming BATWOMAN ANNUAL #2). Even recently I had a conversation with someone about Batwoman and I said, "She's a vampire now...I think?"

This turn of events, which is finally fully explored here is an interesting one. Going back and re-reading issues Marc Andreyko wrote since this change is interesting as well. Then there's Kate's sister, Red Alice. I'm still a little on the fence with her new direction but I am definitely intrigued.

I'm a fan of Georges Jeanty's art and have been digging his run here. We get a great mix of talking/arguing scenes along with plenty of action to move the story forward. Guy Major's colors really adds to the vibe of the story and sets the tone as the events unfold.

I really dig that cover as well.

You get a feeling that certain things are wrapping up since this is the final issue (besides the annual). It almost feels a little sudden how one part of the story concludes with still another to be resolved. To have a big story development that came up months ago not even concluded here (again, it's in the annual) is a little frustrating. But hopefully the annual will allow for more room to complete the story.

Not affecting the rating on this issue, it's a bummer we won't get to see more of where Batwoman seemed to be headed. I was really fascinated by the idea of her with this extremely odd team.

What's going on with Batwoman? We've seen some changes in the last few issues and we do get some answers in this final issues. It's unfortunate that this is the end, especially since not all plot lines have been resolved. But we will get that closure in the upcoming annual. Georges Jeanty's art and Guy Major's colors have been great. Hopefully we'll see plenty more of Batwoman after Convergence. This last arc showed us we could get different types of stories to add to Batwoman's character. 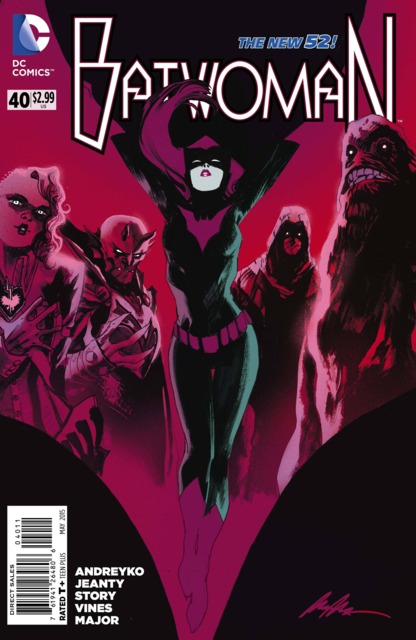