Batwoman #32 - Deadly is the Night

It’s a new story arc as Batwoman finds herself going up against Nocturna.

Ever since she first came on the scene, there’s been something about Batwoman that has captured my interest. Perhaps it’s the character design along with her red hair and emblem. Despite being an offshoot of the Bat-Family, she’s really managed to stand completely on her own.

With the first story arc behind him, Marc Andreyko continues to set things up for Kate Kane’s future. But before we venture too deep into this future (we’ll obviously see a lot more in September’s Future End one-shot), Kate is actually visited by someone from her past—her ex-girlfriend form her days at West Point. This will clearly add some tension to Kate’s life as we watch this portion of the story unfold, wondering what it might mean for Kate and Maggie.

At the same time, Nocturna deals with her restlessness and makes a move that brings her up against Batwoman. Based on the upcoming solicits, this is a plot we’ll want to pay close attention to.

Jeremy Haun is doing a great job on the art. He’s already put his mark on Kate and her supporting cast and it’s nice to see how the tone is evolving.

There’s always some doubt or questions when a new character or story plot is introduced. With Kate’s ex, we’ll have to wait and see what her presence will mean. Even though this is Kate’s book, you can’t help but want to see more of what’s happening with Maggie and her upcoming custody battle.

I have to admit, Nocturna has never been a character I’ve thought too highly of so there is a sense of curiosity to see what Andreyko will do with the character. I’m not sure how I feel about her having a big role in these coming issues but I am definitely going to watch and see how it all plays out.

Batwoman has not one but two women entering her life that may cause some problems or changes in her immediate future. It’s interesting to see how Andreyko is developing story points for both Kate and Batwoman rather than have a focus simply on one guise. Jeremy Haun’s art fits the mood as well as he has to juggle between two different tones. It’s a new story arc so if you’ve been wondering what’s going on in Batwoman’s life lately, this is a great time to check it out. 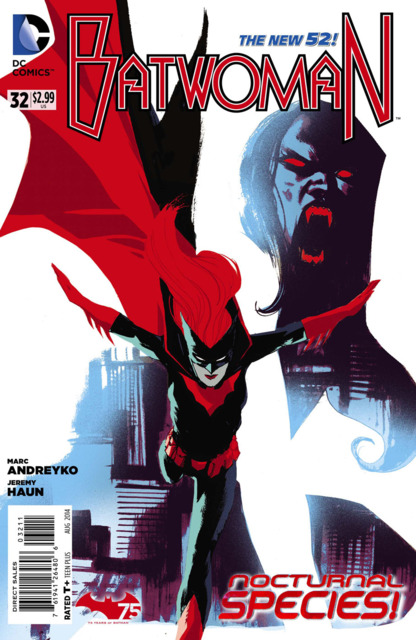