Batwoman is up against an art thief. Sounds harmless, right? Of course it's not going to be that easy.

It's not often we get to see heroes in their civilian lives. Batwoman has had a lot going on in this series alone. Marc Andreyko does a great job showing some of Kate's humanity and even some more interaction between her and Maggie. It makes sense to see Kate acting the part of a socialite even if it's one of the last things she'd want to do. This also serves as a way to introduce a connection to the villain in the story and why Batwoman would immediately get involved.

As the first part of a new arc, the issue does begin with an interesting flashback. This one goes back quite a ways. It's not immediately clear what the connection is and that just adds another bit of mystery to the whole story. Besides seeing Maggie, we also get to see Bette appear which further illustrates how Batwoman is a character that actually has others in her life and isn't just about being a crimefighter.

Jeremy Haun immediately establishes himself as the new artist on the series. There is a variety of scenes he has to draw, including Kate in her civilian and working attire. Seeing scenes of casual conversation along with those of heavy comic book action are always a plus. I can't wait to see more.

The obvious problem here is the lack of a resolution in the previous story from issue #24. We've been waiting to see what happens between Batwoman and Batman but there isn't really a mention aside from a vague reference to some event taking place in Apirl's BATWOMAN ANNUAL #1. Andreyko stated in an interview back in September that they wouldn't be picking up the story right away. It makes sense in some ways to allow the new creative team to start off with their own story but it's still unfortunate for those that have been reading the series from the beginning. It adds a slightly odd feeling to this issue having the story remain unfinished.

If you're looking for a new jumping on point for BATWOMAN, you can easily dive right in here. Marc Andreyko and Jeremy Haun take over the series and deliver a new case for Batwoman. Not only do we get to see Batwoman in action, we also see the civilian side of Kate Kane to remind us of the other part of the character. We'll have to wait for the conclusion to the previous story last seen in issue #24. That puts a slightly sour taste to this issue but with a mysterious flashback and a doosey of a cliffhanger, you should check this issue out. 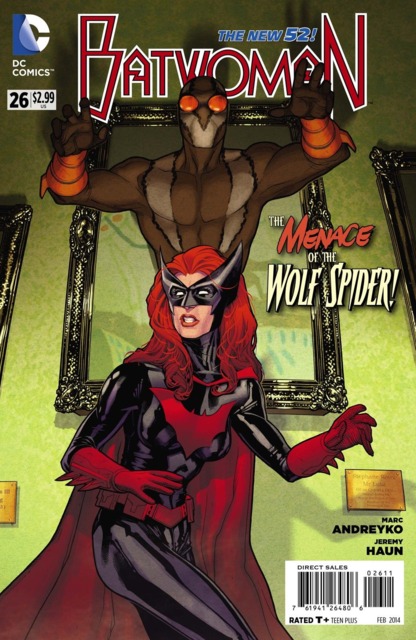