Batwing goes to Italy. This requires some undercover work and a chance to see Luke in action in a different way.

Justin Gray and Jimmy Palmiotti have sent Batwing to Rome. You would think it'd be a cool experience but it actually involves Luke going undercover in a bizarre and deadly fighting tournament. It's a good thing he has his fighting skills and doesn't have to rely on the Batwing armor to get by.

The story is almost a departure from what you would expect. Even though there is a tie to Batman Inc, this is mainly a Batwing story. He does work with someone associated with the Club of Heroes and it's a nice touch. Hopefully we'll see more of this character. The main thing is we get a great story and there isn't a need for Batman to be in it. This shows that this new Batwing has what it takes to hold his own and Gray and Palmiotti have a great grasp on the character.

Eduardo Pansica and Julio Ferreira do a great job capturing the action when Luke is in and out of the armor. There are some interesting character designs and I could really get used to this.

And how cool is that Darwyn Cooke cover?

No complaints. We get a great solo Batwing story in a different locale that captures everything cool about the character.

BATWING keeps getting better and better. Having a closer connection to Batman and (what's left of) Batman Inc is great but this issue also shows Luke Fox can easily stand on his own without the Dark Knight's help. It's clear Justin Gray and Jimmy Palmiotti are having fun with this series and we're the ones being rewarded. Not only do we get some cool and great looking action, we also see a new character that will hopefully pop up again soon. Do yourself a favor, pick up this issue of BATWING if you haven't already. It's a fun read with a cool story. 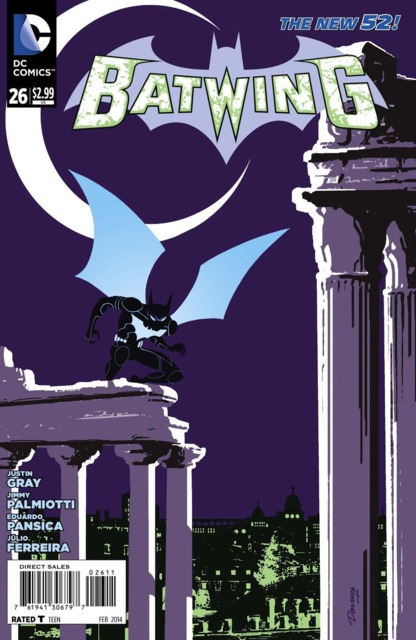