Batwing and his family are attacked. Who's to blame and what can Luke Fox do about it?

With each issue, Jimmy Palmiotti and Justin Gray sell me more and more on the idea of Lucius Fox's son, Luke, as the new Batwing. Right away you get the feel that he's not just another character brought into the Bat-Family. He has his own personality and an attitude that makes him interesting. He's not going to follow orders blindly but also has enough sense to (usually) not get in over his head.

Having Luke's "day job" involve being an Ultimate Fighting champion is a great change of pace. We've seen so many times where the hero, in their civilian guise, helpless when trouble comes knocking. If the $#!& hits the fan while Luke is not in costume, he is pretty free to cut loose with his skills.

At the same time, we still have the fact that Luke, AND Batman, need to ensure that Lucius doesn't find out about Luke's new gig. Batman does still have a presence in this book but it's great seeing him in an almost secondary or background role.

Eduardo Pansica's art is a nice fit for this title. His depictions of Luke, Lucius and even Bruce Wayne look so clean.

It appears things are being set up for a new nemesis for Batwing (and Batman). It is interesting to see an actual new threat rather than a typical Batman villain we've seen time and time again. As we only get an introduction, it's hard to say how epic this threat will be in setting up a new mythos for this new Batwing.

There are also still some moments where it feels Luke is getting the hang of this lifestyle too quickly. I mentioned before how we never really got a look at his training or when he fully became Batwing. While that would have slowed down the story a bit, it's sometimes hard to accept even a trained fighter could jump right into this sort of action.

Palmiotti and Gray continue to flesh out the adventures of the new Batwing. Each issue makes him a more remarkable and believable addition to the Bat-Family. We're treated to a lot of action scenes and the heavy fact that if Lucius Fox finds out Batwing's secret, it would mean bad news for Batman. Palmiotti and Gray are also focusing on new threats for Batwing, which is great. Batwing seems a little too comfortable getting into the thick of the action but it's a blast to see the events unfold. With each issue, I find myself liking this character more and more. 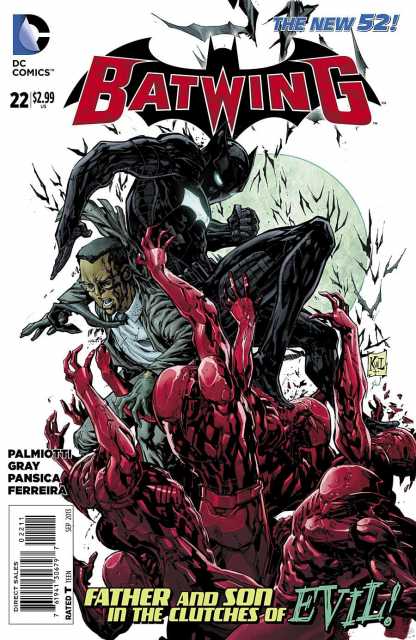