This is it. The new Batwing is on his own and has to defeat a deadly foe. It's not looking too good for him.

Jimmy Palmiotti and Justin Gray continue to flesh out the new Batwing. Rather than just be another clone of a Bat-Family member, you immediately see he has a different feel. Facing Lion-Mane, he's truly being put to the test. This is a man/creature that believes he's a god. His vicious nature and ruthless attacks could prove to be too much for this new hero, despite his previous training as a mixed martial arts cage fighter, this could prove to be too much.

Batwing is clearly being given a long leash. Batman may have chosen him to replace David Zavimbe but still keeps contact with him in an almost Batman Beyond-type situation. You do have to wonder what happens if Batman is called away while Batwing is on his own mission.

Palmiotti and Gray also show us more on Luke Fox's personal life. He's not just another random character in a high tech Bat-suit. It's important to flesh the character out and they are doing just that. Luke is becoming more human and likable as we see he's not a brooding and emotionless hero.

Eduardo Pansica's art fits the book nicely. The suit definitely has a tech-feeling to it instead of just being a regular Bat-suit. Seeing how Batwing fights his opponents differently than how Batman would is crucial in establishing him as his own character.

It's still unclear how much training as Batwing Luke has had. It's understandable that we would just jump into this new direction rather than have issue after issue of Fox training to become worthy of the suit. What's a little hard to grasp is how he could be so calm when a huge man with the body of a lion is in his face threatening to eat him. There is also a point when Lion-Mane throws mud in Batwing's face and he exclaims, "No fair!"

It is great seeing Luke try to maintain a civilian life but how he manages to juggle the two could be a stretch. There's a reason Batman doesn't have many personal relations. Luke will have to come up with a better cover story each time he needs to rush out into action in order to maintain his secret identity.

Nothing against the previous direction of this series but with each issue of the new direction, I become more enthralled. Palmiotti and Gray have given us a new Bat-character to root for and his personality is different enough to set him apart from the others. While he's still a rookie, he does seem a bit too skilled in taking on insane odds, even if he was a cage fighting champion. You can feel the risk he is taking in pursuing this lifestyle while trying to keep it a secret from family and friends. DC, Palmiotti and Gray may have taken some risks in this new direction but it is definitely paying off. I'm getting more and more hooked on the character and can't wait to see what he has to face next. 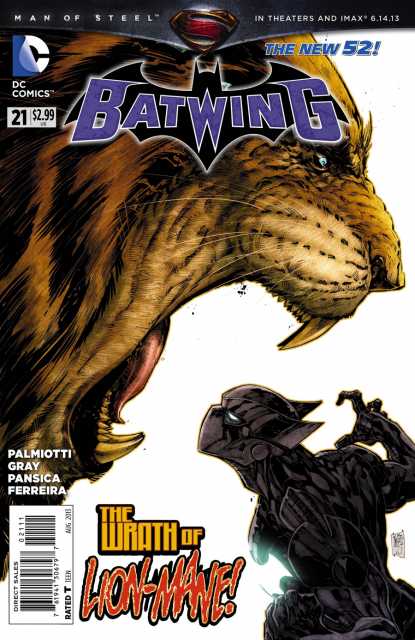