The new Batwing is ready to go out on his first mission. Question is, will he survive for a second one?

There's been some complaints over the introduction of a new Batwing. That's a discussion for elsewhere. Last issue we were introduced to the new candidate in Batman's war against evil. It's a interesting choice and there will be huge ramifications in seeing how it all plays out.

What you'll notice right away is this Batwing is in full action on the first page. Of course there will be the question as to how the heck he's able to be in the suit and out on a mission when we were just introduced to him at the end of last issue. The answer is simple, some time has passed in between and we see a couple flashbacks.

I'll admit, like many others, I was totally on the fence with the introduction of a new Batwing. I didn't see why it was necessary. I don't want to see David disappear in comic book limbo but there is something exciting about this new Batwing. His connection to Batman is going to make for some fascinating scenarios. We're getting a clear idea who he is, what he's like and what he could be capable of. There's definitely a lot of potential in this character.

I'm really digging the art by Eduardo Pansica and Julio Ferreira. The action scenes and the way characters like Batman and Alfred are depicted look as they should but also fully retain their own feel to set this book apart from others. I can't wait to see more. If Batwing is going international, seeing the different locales is gonna be great.

A choice had to be made in how to handle the transition of the new Batwing. Jimmy Palmiotti and Justin Gray didn't go the route of showing us the very first moment or days as Batwing. It's understandable that showing all that could slow down the storytelling. Being able to jump forward a tiny bit keeps the flow of the story going. Seeing him try on the new suit could be interesting but it could also be a little boring. Despite this, there is a feeling of the story being a little rushed. It is like we're just thrown in with passing references as to how he's suddenly ready to jump into some insane situations. We know he had some fighting training before but making the leap to Batwing could be sort of a big one.

The new Batwing is here and makes an explosive debut. We were introduced to him last issue but Palmiotti and Gray throw him straight into the action to show us what he can do. By skating over the first moments with the new Batwing suit, there is a slight rushed feeling but it does keep the story moving and we do get some flashbacks showing how things happened. We've seen different styles or art in this series and there is a very nice feel to what we get in this issue. There is a feeling of excitement as we witness the birth of a new member of the Bat-Family. Yes it's unfortunate we no longer have the previous Batwing here but whether it's the new character or Palmiotti and Gray, my excitement has dramatically increased. I can't wait to see more. 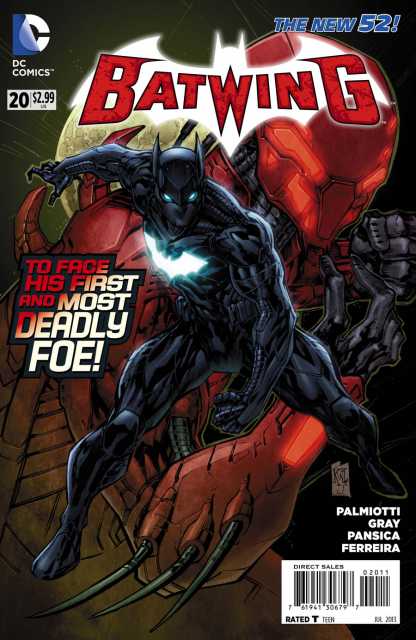