It's the original BSG. This is the adventures of the version some of us knew first. But that doesn't mean this comic won't be full of big action and twists.

I was a fan of the original Battlestar Galactica. I do own the episodes on DVD but, being honest, I've only watched the first few episodes. With the story starting right off with some action, I realized that I might not know or remember as much about the characters' backstories as I thought. Who was Adama before the Cylons attacked and they were forced to flee their world. That isn't necessarily what this series is about but you get a taste of that.

It was always a fascinating idea, as a kid, thinking about these characters searching for the home of their ancestral brothers on a planet called…Earth.

In their mission of survival, you immediately get a sense of desperation from the crew. They are pretty much all that remains and the Cylons' continued attacks place them in a dire situation. With no choice, we see the order given to use a type of weapon that had been outlawed and forbidden. This makes a story that seemed set in the early episodes much more intense. This leads to one crazy and unexpected ending. Coming from Dan Abnett and Andy Lanning, it shouldn't be much of a surprise. I avoided the actual solicit for this issue. It does give a little away but also gives you an idea of how this will be different than a straight retelling of an old episode.

The art manages to capture the likeness of the original actors. This is great for fans of the original show. You can immediately know who each character is as the chaos erupts without needed any introductions. New readers won't have to worry about who some of the characters are at this moment and will find out more when necessary.

The colors in this book were nice and vibrant but too much for a sci-fi comic. This is my common complaint with sci-fi stories. With such bright colors, especially in space fight scenes, it really makes it stand out that this is a comic and pulls you out of the feeling of the live action counterpart.

The Galactica looked a little plain in some panels. I'd imagine trying to draw all the detail would be a pain but it looked too gray and felt dull.

This is a very interesting take on the original Battlestar Galactica characters. It starts out completely feeling as fans of the show would want and expect. We slowly see more until the story gives us a crazy twist. Because of this, there's no telling where the direction of this series will take us. That adds to the excitement of seeing something different rather than just trying to retell the original stories. Cezar Razek's art does a great job in capture the likeness of the original actors. The colors are nicely done but almost feels as if it's too much at times. Too much color in sci-fi comics makes the presentation feel overly artificial. As a fan of the original show, I'm digging this direction. Dan Abnett and Andy Lanning know how to tell space stories and even if you think you know all about these characters, you'll find yourself nicely surprised by the story. 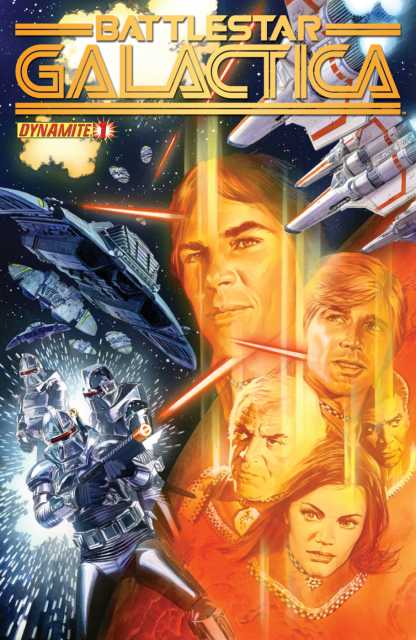