Who is Joker's Daughter? Where did she come from? You might be better off not asking those questions.

Georges Jeanty has drawn quite a few issues of BUFFY THE VAMPIRE SLAYER. It's always interesting to see an artist take on other characters and being able to see how they handled other universes.

At the end of Death of the Family, we saw Joker's face/mask fall off. We knew something would have to come from that and this is where we get to see what happened to it. It's almost hard to believe that it's still intact but thankfully there is mention of it smelling bad.

This is a comic and a character I wish didn't exist. Basically, I don't really see a need for this character. This might the first time in a long time where I really don't want to see a continuation.

For a "new" character, her origin is a little unclear. It's all laid out but there are moments where confusion sets in. Either this is intentional or the art doesn't quite match up to what the plot is trying to convey. It does go back to her childhood (surprise!) but in this instance, she didn't suffer from any sort of abuse or hardship. The biggest confusion is when she is born and her joyful father suddenly changes his temperament. There doesn't appear to visually be wrong with her. We get the impression she is deluded in some way so perhaps we're supposed to be confused? Maybe we're not really seeing what really happened?

Joker's daughter, named Duela by the way, makes her way to an underground city, beneath Gotham. I can't say I know too much about this place or the people there. I think maybe there's been some mention in CATWOMAN. The question is, does Batman know about this place? Would he care? Duela is determined to wrestle control of the city for herself. Are we supposed to believe or accept she automatically has some sort of fighting skills? Actually it turns out she really doesn't.

The name Duela may be a throwback to Duela Dent. Thankfully it's pretty safe to assume that is the only connection between this character and that one.

Joker would be appalled to see his face used in this issue.

For some reason I cannot understand, there seems to be a lot of interest or buzz in this issue. After reading this, that makes even less sense. It's nice to see Georges Jeanty on a DC comic. The problem is this didn't really feel like a DC comic. Joker's Daughter may have wanted to stand up for the women in this mysterious secret underground society but everything else about this issue is something I want to forget. Joker's Daughter is headed to CATWOMAN #24 next. I will be sure to avoid that. 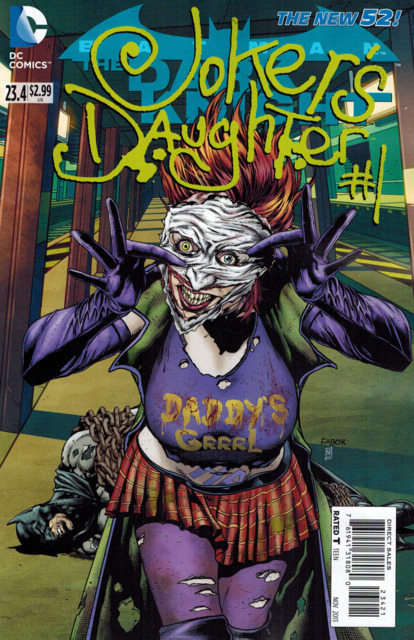