The fate of the world hangs in the balance. This might be even bigger than just Batman and Superman. Time to call in some family for back-up.

I'll admit, I was a little skeptical over this annual at first. I've really been enjoying the main series but the recent sideways-art story arc with Mongul wasn't my favorite, partly because of the sideways format. Often annuals contain stand alone stories that may not always "matter" in the long run, but this story was picking up where that left off. That could be good or bad. There was also the fact that there's a lot of 'guest stars' here that could feel a little forced.

That wasn't the case.

This is a story I was thankful could be told in a self contained annual-size issue. With the fate of the world at stake and a huge battle ahead of Batman and Superman, you're going to want to see it all in one sitting. Greg Pak continues the tradition of the original SUPERMAN/BATMAN series by allowing us to get inside their heads. "Hearing" what they're thinking is great to let us feel more of a connection.

Both of these characters are big on the idea of "family." When it comes down to them needed to bring some back-up, it's nice to see who they choose, particularly when it comes to Batman's choice. This isn't the typical battle Batman and Superman have faced. Both are facing the possibility of having to push themselves further than usual.

We are also treated to some gorgeous art. Jae Lee starts the issue off. I sometimes note the occasional lack of backgrounds but there is simply something about this style that astonishes me. The second act is by Kenneth Rocafort, another favorite artist. The third act features art by Philip Tan. It is a treat to get to see all these characters depicted by these three brilliant artists.

Even though this was an oversized story, there were some minor moments that could leave you scratching your head. It feels like a sudden situation with Batman and Superman needed to fight this new threat. When they call in their back-up, it's almost as if they came out of no where. Were Jason Todd and Steel just sitting around nearby waiting? I haven't been keeping up with SUPERBOY so I'm not sure where Krypto came from or why he was with Superboy before.

There is the slight shift in art that happens for each "act." It's not a full and clear break in the story (but is separated by "Act One," "Act Two," etc). It's not too much to get distracted by since all three artists are good at what they do but we are talking about THREE different artists on one story.

Parts of the overall story didn't quite sit right with me. Perhaps I just don't fully understand the rules of Warworld. Either way, it's still a highly enjoyable story.

This is the kind of story I like in an annual. If I'm going to pay more for an issue, I want to see some big action, lots of characterization, and great art. Getting to see more than just Batman and Superman fight was really cool. Greg Pak does a wonderful job capturing the essence of Superman and Batman along with Jason Todd and Supergirl. This story is enough to make you want to see more from this situation by any of the three artists. There were parts of the story that didn't quite mesh perfectly but it can easily be overlooked when you allow yourself to sit back and enjoy the ride. It's comics like this that remind you how much fun reading them can be. 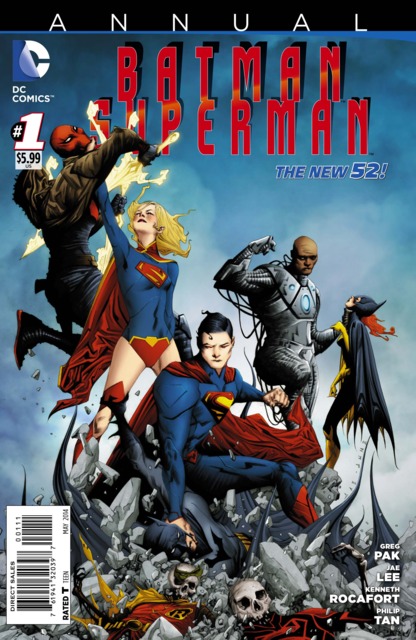