Mongul has big plans for Earth and they're now being set in motion. Will Superrman and Batman be able to stop him... or will they be too busy fighting each other?

Greg Pak laid out all of the basics in the last issue with Mongul pulling the old "I'm going to tell you all about my plan because I don't believe you can stop me" speech. Now that the basic premise is out of the way, this chapter's relatively light on exposition and it's all about focusing on how Batman and Superman are acting out-of-character and, of course, giving them plenty of chances to battle. Mongul isn't nearly as intimidating as the captions and art make him out to be (I love his diabolical smirk), but I won't lie, it's always nice seeing Clark "cut loose" and how absurdly powerful a single strike from him can truly be. Plus, Pak throws in a few more remarks that gamers are sure to appreciate (skip the cut-scene!). Thankfully though, Superman doesn't talk about being a troll. There's just something odd about Superman admitting to trolling Batman, isn't there?

Brett Booth and Andrew Dalhouse provide a consistently solid set of good to jaw-dropping visuals for this action-packed chapter. It's a clean set of panels and, when projectiles are used, the colors go into overdrive and things get downright beautiful and vivid. There's one splash page towards the end of the issue which is 100% wallpaper worthy. It's glorious.

The weight of Mongul killing Batman just isn't there because... well, we all know he'll probably be back to his usual self at the end of this arc. Regardless, I'm sure this plot device exists so we can get a slightly different take on the Batman/Superman fight, but despite some magnificent images, it unfortunately isn't too exciting. It's their personalities and unique skill sets which often make a conflict between the two interesting, but in this case, it's two purposely out-of-character heroes going at it like bricks. It looks amazing, but I don't see it going down as one of the "must read" Superman and Batman fights.

There's some gorgeous visuals in this issue, but occasionally, the characters came off slightly stiff (e.g. Batman in the opening scene) and every now and then facial features (notably with Kal) fluctuated a bit. There's one moment where Superman's getting punched but it simply looks like he's flying away. Lastly, Mongul looks great and his plan certainly touches on an interesting topic, but the role he actually plays feels pretty minimal -- it's basically reduced to looking formidable and getting smacked around. Hopefully he'll get more of the spotlight in the next issue.

The second issue of BATMAN/SUPERMAN's latest story arc is a great dose of popcorn entertainment. "Boss Fight" is definitely an appropriate name for this issue because it's basically one big ol' brawl between powerhouses. Seriously, if you want to just sit back and appreciate some solid looking chaos, then this is well worth your attention. 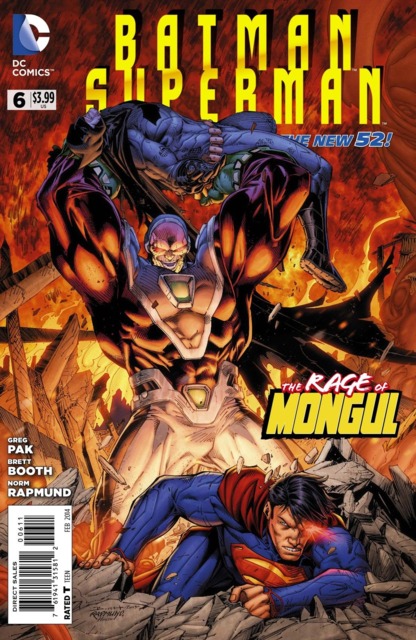