Toymaster makes his debut in the New 52 and it looks like Batman is going to get thrown in the middle of a crazy real-life video game.

Back in the current continuity (sort of), we get a little more insight into the relationship between Batman and Superman. Greg Pak illustrates the difference between the two from the beginning. Bruce is all business while Clark tries poking a little fun at Batman. We also get to see that while Superman is capable of handling numerous threats, he can't be everywhere at the same time. It might be possible for Batman to take on one of his enemies. This idea is only touched upon but it's always interesting to see a hero take on someone else's enemy.

Seeing Hiro Okamura as the main threat, I'm reminded a little of the past story from SUPERMAN/BATMAN. The problem created here is an interesting one for Batman to deal with.

We have a change of pace in terms of the art. Brett Booth and Norm Rapmund handle the art duties with Andrew Dalhouse on colors. It's great seeing them deliver the visuals, especially with the comic telling the story in a horizontal format. That means you have to turn your comic sideways and we're able to get bigger panel to fully see all the details put in (more on this in a moment).

It's not a huge concern but it's not clear when this story is meant to take place. With Nightwing's "appearance," we have to assume it's before FOREVER EVIL. Along with that, Bruce is not surprised to see Nightwing in Gotham when he's currently in Chicago. It's doesn't affect the story but the random, out of continuity stories is what turned me off of the original SUPERMAN/BATMAN series.

There are moments when the flow of the story is a little confusing. First Batman and Superman are doing their own thing. Later we see Bruce working out while Clark is having a chat with General Lane. It feels like the story is jumping around a little.

With the horizontal format, we do get to see more of the art but...with bigger and fewer panels, it feels like we're getting less story.

Brett Booth and Norm Rapmund join Greg Pak and bring Batman and Superman closer to the current continuity (compared to the first arc). Without having to go into detail, Pak shows us what makes them so different yet illustrates the friendship they've formed. We get an interesting change of pace in the story and having it in a horizontal format allows for the art to appear larger, thus giving us more detail to see. Although it also results in less panels overall. If you're looking for some old fashioned fun Superman/Batman story, this is shaping up to be another interesting story arc for the two. 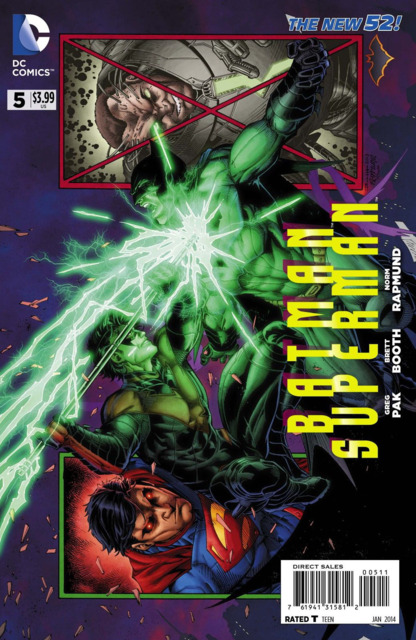