It's the end of the first arc. Will Batman and Superman survive their first encounter? Of course they will but what sort of repercussions will result from this?

This arc has been a trippy read. We've been reading the strange first encounter between Batman and Superman in the New 52 Universe. What has made it weirder is we thought we already saw their first encounter (which happens later) in JUSTICE LEAGUE #1 plus the fact they ended up on Earth 2 with their counterparts. But everything is nicely explained in those regards.

Greg Pak has shown he can write the two with care but also further fleshed out the Earth 2 versions of them, as well as Lois, Wonder Woman and Catwoman. If nothing else, this arc has made me long for more stories dealing with the Earth 2 characters before their demise.

In this final battle, things get pretty intense. Throw in Jae Lee's art and it all has an almost surreal feel. Seeing the fights and interactions between the heroes and the bad guys all looks so good. You can't help but want more. Ben Oliver does a good job wrapping up the art in the issue as well.

How come Batman and Superman don't mention this encounter or anything about Earth 2 after this? Well, it was pretty obvious what would happen. It's something that had to happen. Still, it was a fun arc to read.

Greg Pak and Jae Lee have given us quite a first an arc in this series. It's been a strange adventure packed with some really cool moments. You can't help but want to see more of the Earth 2 versions that Pak has fleshed out. It'll be interesting to see what Pak has planned for Superman and Batman next. Pak shows he gets who the characters are and we're in for some great stories in the coming months. 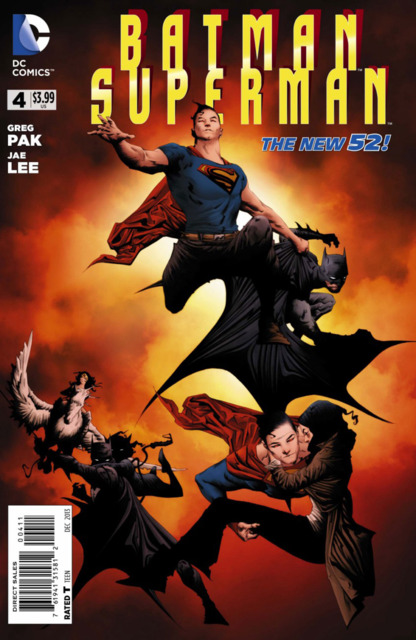