They're not in Kansas anymore. Or Gotham. Somehow the young versions of the New 52 Batman and Superman have ended up on Earth-2. Of course there'll be some fighting.

There's a new player in the picture. In the last issue we saw the 'first' meeting between Batman and Superman. It didn't go too well. As the two fought, they suddenly found themselves in familiar, yet completely different, settings. Batman and Superman have been transported to Earth-2 by a new threat.

This series is bringing a new twist to the concept of a first encounter in comics. We've seen many times when the heroes meet, they end up fighting until they realize they're both heroes. Throw in the alternate versions from Earth-2 and our two heroes have their hands full. Instead of just dealing with a new threat, now they are in a strange world where everything they know is somehow different. Seeing Batman and Superman discover the changes from EARTH 2 is pretty cool. It's also fascinating and eerie seeing Batman, Superman, Catwoman and Lois Lane before they meet their fate which was revealed in EARTH 2 #1. Seeing this Catwoman and Lois makes you wish to see more of these versions in EARTH 2 but unfortunately...

Jae Lee's art is extraordinary. He creates such a surreal vibe through his art along with the colors by June Chung. Some of the backgrounds may be a little sparse but the art is so nice to look at. The characters (especially the one standing on the last page) look so incredibly epic.

If anything, the lack of backgrounds is a minor complaint. But being familiar with Lee's style, it shouldn't be something to really complain about.

The inclusion of the EARTH 2 characters is a little odd but it does make an intriguing story.

Greg Pak continues his ambitious beginning on this new series. For a series meant to spotlight DC's two biggest characters, you would expect nothing less. Pak is crafting a grand tale and despite being set in the past, there's absolutely no telling how this is going to end. Jae Lee's art and June Chung's colors are a thing of beauty. You can't help but be mesmerized by the character designs, especially with how majestic some appear. The story and art has such a surreal feel, you won't be able to resist getting sucked into this comic. Hopefully you won't need a passport for the journey. 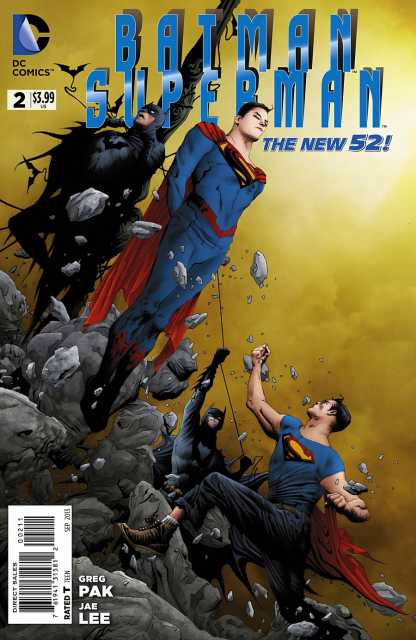