It's always sad when a series comes to an end. But what an ending this one is.

This is the final issue in the digital first series of BATMAN: LI'L GOTHAM. There is still the printed versions and the trades coming but this is it. It's hard to believe the first chapter was just a little over a year ago. Each issue by Dustin Nguyen and Derek Fridolfs has been a joy. But as the cliché states, all good things must come to an end. Of course Nguyen and Fridolfs give us the best ending posible.

Being the holiday season and each chapter centering around them, this issue does touch upon the Christmas-y time of year. Basically Damian is under house arrest, which isn't too hard to imagine why and Alfred takes the opportunity to try to enlighten Damian a little about the time of year and the meaning of family in the Bat-universe. That means we see several familiar faces included for a grand send off to the series.

This series has always had such a unique charm. Dustin Nguyen's art in this style easily warms your heart, regardless of which character is in the panel. Seeing even the fiercest or most evil characters will bring a smile to your face.

As a final issue, it was pretty much everything you could want at this time of year. I won't lie, I got sad over the mood and message of the story mixed with the fact that this is the end (especially the last we'll see of Damian).

Of course the only bad thing is this is the last issue. Everything else was wonderful.

If you've never read a chapter of BATMAN: LI'L GOTHAM, you need to rectify that immediately. You definitely need to check out this final chapter (plus it's only $0.99!). Dustin Nguyen and Derek Fridolfs have done an amazing job on this series. Each chapter has been delightful, fun and flat out amazing. It's rare to see a comic, especially a Batman one, with so much heart. While there are still the printed issues and collected trades coming, this marks the end of a great thing. This was an brilliant issue and series. It gets me a little misty-eyed to think that this is it. All I can say is thank you to Derek and Dustin, as well as everyone at DC that allowed this series to happen. 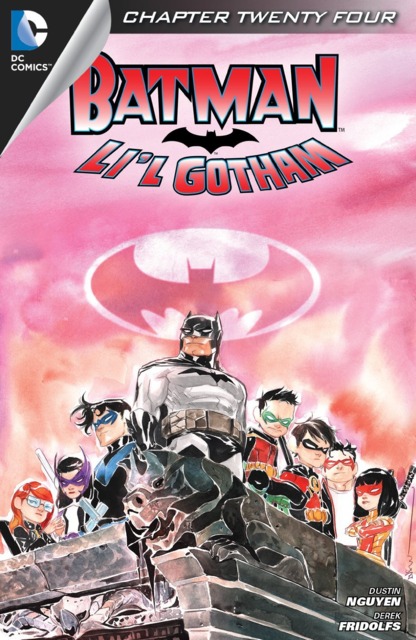