Batman, Incorporated #13 - The Dark Knight and the Devil's Daughter

This is the end. It's the end of many things but also the beginning for others.

This is what it's all come down to. Grant Morrison and Chris Burnham have been guiding Batman and Batman Incorporated down a dark path these past few months. Of course the story goes back further - into Morrison's previous Batman run. Batman's fight against Talia and Leviathan has left quite a mess. Batman and Gotham City won't be the same after this.

Since this series started, there has been several questions left unanswered and new ones thrown in our faces. From the confrontation between Batman and Talia, Bruce Wayne's interrogation and the new developments at the end, this is an extremely fitting story to mark the end of Morrison's tenure. You'll find yourself smiling seeing certain things occur yet you'll still have that sinking feeling over some of the darkness that goes along with the story. I was especially grateful and excited to see the return of a certain character. Let's hope we get more.

Chris Burnham's art is a welcomed sight. He manages to deliver nicely gritty detailed panels that make you feel what's going on. Bruce Wayne might have looked a little too beat up but at the same time, it's great to see a hero actual wear his battle wounds rather than miraculously heal moments later. It's a joy having Burnham's art for the entire issue.

A big thank you to Grant Morrison for a panel with a character uttering three words that completely sums up what Batman's about.

Batman Incorporated was a fascinating experiment. It took Batman to different places and introduced many great characters. It's fitting that with Grant Morrison's departure, we may be seeing less of the idea as a whole (let's not forget the one-shot coming in August). This series gave us a lot of what we wanted to see. We had some endings and some beginnings. The Leviathan story felt it went on a little too long at times but there were definitely some great moments throughout. Who else is ready to re-read all the stories from the beginning once more? You'll get excited over the events here but you'll still be a little sad over seeing some things end. It's not often a story can tug on your heart-strings like this. 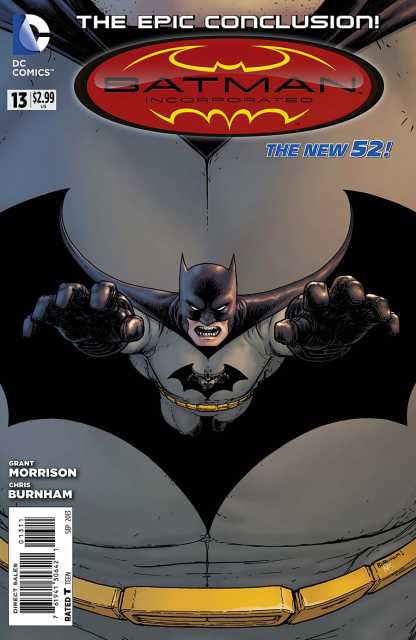