The deadly battle between Batman and Leviathan continues. Find out how far each will go to in order to win.

The fight between Batman and Talia is continuing to escalate. We've seen Batman suffer a huge loss and seeing him trying to continue with the odds against him increasing is great. What we are seeing is the end of Batman Incorporated. This is something Grant Morrison has mentioned and it is fitting with his run quickly coming to a close.

We are now seeing in the midst of this battle, Batman also has to deal with Gotham City being against him. This isn't in the Scott Snyder/Gotham-is-an-entity approach. This is the people of the city. While it might be a bit extreme, I have to say I am completely on board with Batman not being welcomed in the city. I totally miss the days when Batman operated in the shadows and outside of the media's eye. Batman Incorporated was an odd direction but it did provide a new direction and many stories since Morrison introduced it.

The battle has escalated. You can feel the explosive finale is fast approaching and there's no telling what will happen next.

With each issue, I enjoy seeing Chris Burnham's art. His depiction of the city in chaos is fantastic. It's great seeing Bruce Wayne still showing bruises on his face, something that usually magically disappears in the next issues of other titles. There is a lot to see in this issue. Grant is having the art team throw in lots of details and locations.

You should also be happy at the appearance of a couple characters we haven't seen much of in the New 52.

There is a slight odd feeling in terms of the timing of events. Bruce is still bruised from his fight but it almost feels like a lot has happened since issue 8.

We know by now not to worry about continuity with other titles. It is a little difficult to overlook the fact that the events dealing with Damian are heavily felt in the other titles yet the repercussions of city's turn on Batman and Batman Inc. are not being seen.

I enjoy Burnham's art but as when there are multiple artists on a single issue, you can feel a slight jarring distraction when the art shifts to Jason Masters.' It's just enough for you to get momentarily pulled out of the story.

Many have been having problems over the gatefold covers all month in the DC Comics. The cover was pretty cool but, for obvious reasons, it would have been better if that image wasn't used to take away from the actual events in the issue.

The end is near. Batman is trying to end the battle against Talia and Leviathan. Things are not going according to plan for either side and you can feel the tension rising as the story approaches the conclusion. With some welcomed appearances by a couple characters, the story continues with a big feeling of everything being unpredictable. With Morrison ready to end his run, you can't tell what might happen next. It's almost enough to make you scared to see the next couple issues. Of course there's no way you'll want to miss them. 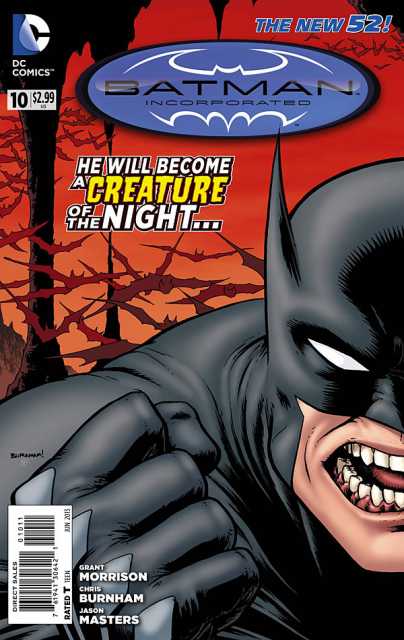