Batman is pretty much prepared for anything, right? Here's how he prepares for the FUTURE.

We're in the midst of seeing the New 52 characters five years into the future. As a sort of prelude to the Scott Snyder/Sean Murphy Batman story in DETECTIVE COMICS #27, we get to see how Batman started preparing for the future. In his mind and heart, there must always be a Batman. That's easier said than done. We know he has a bunch of allies, all of whom might take on the mantle should the need come. But we've also seen that they sometimes have their own paths and legacies to carve out.

In this potential future, Batman is in pretty rough shape. We know things are often bad but he's looking pretty rough. He has one final mission he needs to go on in order to complete the next part of his plan to ensure there's always a Batman. This requires literally putting his life on the line, due to his body's condition, and entering an area he declared off limits to all his allies. The result is being able to witness Batman's potential last hurrah. We get to see just how skilled and prepared he is.

ACO's art pretty much captures the vibe of the story. You can almost feel how beat up and tired he must feel. We have a bit of a sense of mystery due to not knowing Batman's endgame here. What is he really after? The art really shows the danger and urgency he's dealing with.

If this is just five years in the future, man, Bruce has gone through some tough times. It might just be the art but it looks like more than five years has passed. Whether this actually fits into the FUTURES END future time line, isn't clear. We can assume so and I believe there was something about a war? So perhaps Bruce has aged prematurely fighting the good fight. The same can be said for Alfred.

There was a slight feeling of isolation in this issue. It felt cut off from the rest of the DCU. That's fine for the sake of the story but it seemed a little odd we didn't see anyone else or hear about anything else going on.

The future is here for Batman and it doesn't look too good for him. In the ultimate portrayal of what lengths Bruce is willing to go to ensure his legacy lives on, we see him put it all on the line to complete a crucial part of his planning process. We get to see a beaten Batman go to great lengths and put to the test to try to make this happen. This isn't the Batman you're used to. It might only be five years in the future but Batman looks like he's been through quite a bit. If you dug the Scott Snyder/Sean Murphy story in the recent DETECTIVE COMICS #27, you'll want to check out what events may have lead to making that happen. 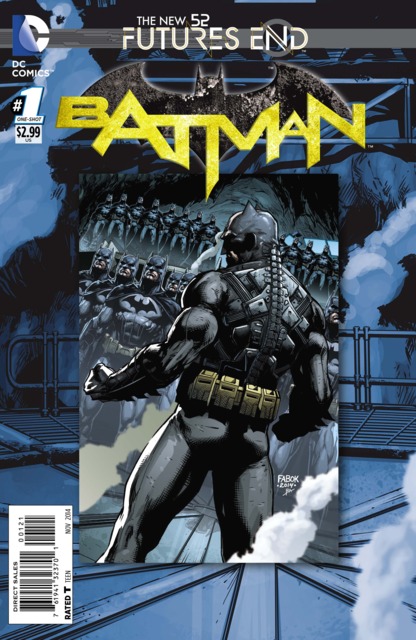