This book's been a long time coming but sometimes things happen. Instead of wondering what took so long, I found myself diving in and relishing the fact that we're able to read what feels like a classic Batman and Joker story with a pretty impressive creative team--Matteo Casali, Brian Azzarello, Giuseppe Camuncoli, Jim Lee, and Alex Sinclair.

From the very beginning, you can feel this is a slightly different Batman story. We're used to seeing him pretty much mop the floor with everyone but when a fight with Killer Croc takes longer than it should, it's clear something is up. Discovering there's a virus (on a couple different fronts) leads Batman to Berlin.

There's something about seeing Batman out of his element. We've seen him in different places with the Justice League but it's nice seeing him do his thing elsewhere. The fact he'll have to somehow team up with Joker sounds like it could be a mess but it adds a nice twist to further make this a different story. As for the specific setting, so far it does feel like it could take place almost anywhere. Hopefully the next issues really drives home the point for Batman traveling overseas.

The art is pretty fantastic. Jim Lee works over Camuncoli's layouts and Sinclair's colors really gives it a spectacular feeling. Without inks, Lee's art looks familiar but also makes it feel different from his previous Batman stories. It really helps it stand out as its own story and you'll find yourself not worrying about continuity or where the story would fit in.

Batman and Joker. Those two things alone are a selling point. Throw in the impressive creative team and the fact the two enemies have to work together, you have an interesting comic on your hands. There were some delays with this book coming out but now that it's hear, we're able to enjoy a classic feeling Batman story. Jim Lee's art over Giuseppe Camuncoli's layouts along with Alex Sinclair's colors makes this a really pretty book. The issue sets up the overall story and will leave you wanting a little more. You can definitely feel the bigger story brewing.

The art and colors are very fantastic in this issue. I am really enjoying how they are doing this story,has alot of mystery and well seeing Batman vulnerable is always nice to see.

Europa, TDKIII, WW: Earth One....should we expect All Star Batman and Robin any time soon too? DC is really bringing out all that content, need for cash, finally completing, who knows? I just love that we are getting all these.

Anyway, this reminded me of Batman TAS....I loved it.

@squalleon: it probably has more to do with how well all the various TV properties are doing and the new fans those properties are bringing in over a need for cash, the need for easily accessible new books usually increases when they expect increased cross-media interest. Increased Gotham numbers = more Batman stuff, more interest in the movie version of Wonder Woman = Earth One, surprisingly nothing comic related for Supergirl, I totally expected something Supergirl related before the show started, Arrow and Flash had the digital first comics.

It's really good. My wallet is crying from the comic spree I've been on tho

This issue definitely scratched the Batman itch. In a way it was refreshing to read a straight Bat title. Lately, Snyder's run hasn't been very engaging.

This is what the main Batman book should be like.

This is what the main Batman book should be like.

Azz is a fanfic writer now?

Nothings wrong with that.

Ah man, a wait till April for the hard back trade. I want to read in one go

This reminded me a lot of Batman: TAS; I liked it a lot. Simple and fun.

If Jim Lee is involved I'm always interested. Mostly due to the fact that his projects are so far and few between. Speaking of Jim Lee, isn't it time DC reintroduced a WildC.A.T.S. series? That's something I would buy, and currently, the only two DC books iIm buying are Constantine: The Hellblazer and Batman. Well, I'm also buying Batman Europa and The Dark Knight III, to clarify.

I also like how the writers put Jim Lee near Joker's shoes, very interesting. Very.

The first issue was pretty good; enjoyed it more than the main Batman title that Snyder is writing, but that's due mostly to Lee's stellar artwork (not that I don't love Capullo's art, I just prefer Lee's), and the fact that Wayne is Batman, and not Gordon. Hopefully this remains at a high level of quality and doesn't start to drag or anything like that. I can't wait for the trade!

Definitely buying the next issue. Here's hoping they release an Absolute Edition of this as well. Please do, DC. 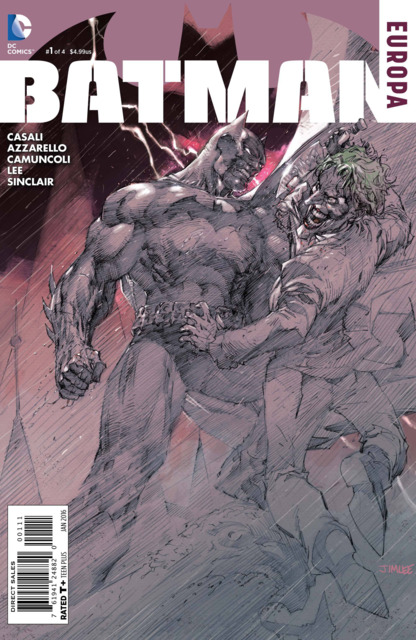