Batman Eternal #9 - The Unburied Past

Batman teams up with Jiro in Hong Kong to find out the gang war has extended overseas.

BATMAN ETERNAL has done a fine job at building on the world of Batman and taking already established elements and building on them. In this issue, Batman spends his time working in Hong Kong with Jiro of Batman Incorporated. It's great to see these two characters in the same book again and for this weekly to embrace some of the other Batman related elements and not just things happening in Gotham.

Hong Kong's Batcave, located in the top of the Wayne Industries building gives the reader more of an insight of how Jiro operates, but don't worry, he has his own giant coin and giant lizard monster to keep him company.

The big BIG thing with this issue is the reveal of a certain character. First, don't let the hype get to you because the reveal isn't as big as some people are making it seem. However, the woman at the end of BATMAN ETERNAL #8 turns out to be Julia Pennyworth. This is a character that hasn't been seen in decades, and this is a reveal that is going change a ton of things in Batman's life.

Another chunk of this book follows the solo adventures of Catwoman as she meets face-to-face with Falcone, who has a score to settle with her. The large writing team knows exactly what they're doing here. They're leaving little pieces of an upcoming story, while we follow Batman off on his mission.

Guillem March does a fine job on this issue with the artwork, especially in the scenes with Catwoman. There's a shot of Catwoman, completely surprised and caught off guard that just looks brilliant here. Aside from that, the action sequences look very nice and all-in-all this is a very aesthetically pleasing issue.

The issue is good, but not great. The series is really picking up, but the jumping, week to week, between side stories leaves the reader wondering when certain things will be coming back into play.

BATMAN ETERNAL continues to prove it's a worthwhile, weekly book. It has a strong writing team and strong artistic team behind it. While there were some bumps in the road in previous issues, issues #8 and #9 make this book feel like it's right on track. The big reveal with this issue is very interesting and promises some interesting changes in the book coming down the road. The big question is whether or not to put this book on your pull list, since it's technically 4 books a month. It's pretty easy to say that this book is worth your time and money, since it's a pretty strong Bat-title. 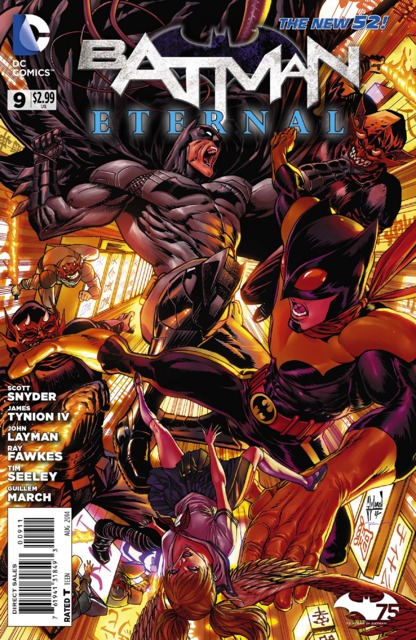