The tide turns slowly, but it turns. For all but the Dark Knight himself, that is.

THIS REVIEW CONTAINS A BLOCKED SPOILER ABOUT LAST ISSUE

The conclusion to BATMAN ETERNAL is just around the bend, and things have not only come to a head, but are overflowing as the mastermind behind one of the most complex conspiracies in the history of a city KNOWN for complex conspiracies. The Cluemaster pulled the wool over everyone’s eyes and, in doing so, has Batman at his mercy. But, in spite of the writing team’s ability to make this a more psychologically realistic take on the Bat-Family, what’s a supervillain without some good old fashioned monologuing. And while the trope of the villain who just can’t get it done for want of speechifying, in this case it actually feels earned. This is a character who WOULD absolutely want to lord it over Bats that he got the better of him. And if there’s one thing that Scott Snyder, James Tynion IV, Ray Fawkes, Kyle Higgins and Tim Seeley have been consistently great at for the last 51 (FIFTY ONE!) issues, it’s been crafting characters that feel, if not real, at the very least like they’re doing what they’re doing because of consistent internal motives.

Alvaro Martinez’s pencils on this issue handily takes care of one of its most consistent problems: artistic detail. Clearly with a weekly title allowances must be made and sometimes speed can be prized over quality, but in the case of Martinez we get some deep, detailed characters with some amazing attention to facial features especially. This is another action-light issue, so the emotional beats and impact need to carry the dramatic weight, and Martinez’s pencils do that extremely well. Adding to the impact and weight of every panel of this are the inks of Raul Fernandez and, again, in a mainstream superhero issue that’s light on action, it’s never more important to have fine, sharp details stand out as much as possible. June Chung’s colors breathe life into a city ablaze, contrasting the darkness of night (and the failing power grid) with the brightness of the fire that threatens to consume everything that the Bat-Family has worked to defend.

Stephanie Brown takes an odd character turn in this, and it’s one of the few times in this entire series where it feels completely unearned. It’s clear where that turn is going to lead her, but only because of narrative convention, not because of any on-panel indication.

There’s a tremendous twist at the end of the issue, and while the twist is great, the character revealed has a tweaked design that is not as effective nor evocative as the last one the character was seen in.

To reiterate: the twist at the end of this issue is a phenomenal one that pays off longtime readers of recent Batman stories, but even people who jumped on with ETERNAL can appreciate it on a visceral, basic level which is one of the hallmarks of a truly great twist. Another great hallmark is that it’s a wonderful payoff that makes total narrative sense, especially in the long-term. The occasional speed bump cannot derail a story this powerful and this effective, and this issue continues the consistency of the overall title. 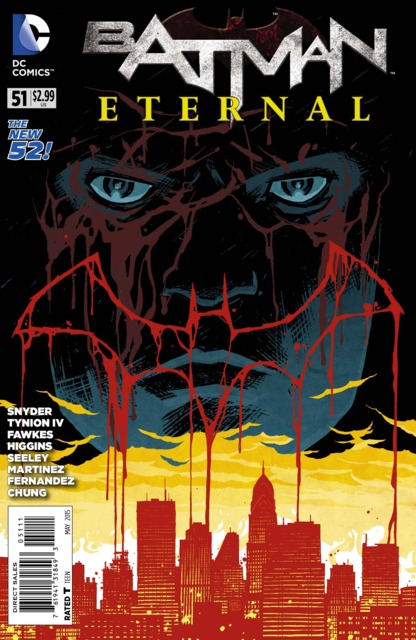