It’s up to Harper to suit up and try to save the day.

Harper is a character that fascinated me from the first moment I saw her. Appearing in a single panel in BATMAN #1, I thought there had to be something about this character to have appeared in that issue the way the page was laid out. We slowly discovered who she was and what she was capable of. Throughout this seres, we’ve seen her progress grow while working on her own and with Red Robin. She’s been determined to make herself a better person and her stubbornness and natural abilities gives her a chance to survive in Gotham City.

One of the threads we’ve seen in this title is people being controlled by some strange tech. Last issue we saw Red Robin, Batgirl, and Red Hood fall victim to this same mind control. We’ve known that Harper would eventually suit up to take on the Bluebird guise we saw in BATMAN #28. There’s always a good feeling seeing a character grow into a formidable hero. We’ve been watching her go down this path despite Batman insisting she stay out of this world. There’s still the question of who is behind this attack as well as Hush’s actions. There’s also some developments with Spoiler that lead into the situation we found her in that same issue of BATMAN.

The art is split between Jed Dougherty, Goran Sudzuka, and Roger Robinson. Thankfully each handles a different group of characters within the issue rather than have the entire issue of events randomly split between them. Harper's Bluebird costume has some tiny minor changes from BATMAN #28 and it's interesting to see the artistic interpretation here as we see her in action.

Some of the events in this issue felt a little too convenient. Harper’s encounter with the bad guy went pretty quickly, almost as if the story had to be rushed a little to get closer to the point that BATMAN #28 showed us. Batman arriving just as things are wrapped up felt a little trite. Where was he before when three of his closest allies were captured? He shows up just in time to see Harper pretty much win the battle.

While the art was nicely separated, there was still the obvious shift in art from scene to scene.

This issue may not have the biggest impact in the grand scope of the series but it does bring Harper further into the Bat-Family as she finally goes into action in her Bluebird guise. The events are approaching what the flash-forward events seen in BATMAN #28 and Batman is trying to get closer to finding out all the answers. The issue has three different artists. While they do work on separate character moments rather than splitting the entire issue three ways, it still is a noticeable shift in the middle of the story. If you're interested in seeing Bluebird's first outing in costume and what happens to Spoiler, you'll want to check this issue out. 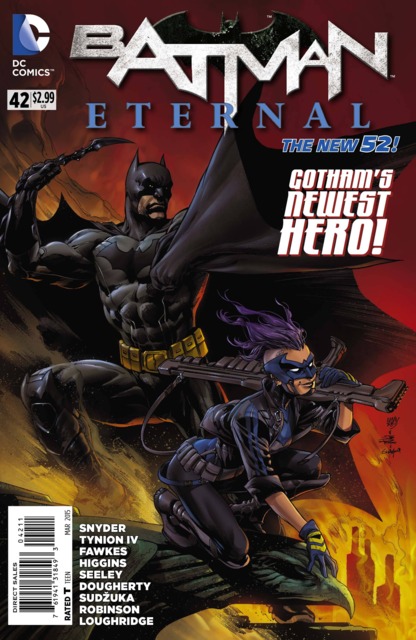