The one thing you cannot say about this series is nothing happens. Starting out with the first thing people will likely be talking about, we have the return of Stephanie Brown. While we've seen her in BATMAN #28, this is her proper "first" appearance in the New 52. It's a great introduction and gives newer readers a good first introduction to the character.

The main focus of this issue is what's going down in Gotham City. With the recent disaster and Jim Gordon's role in it, there's a lot hanging in the balance, especially with the GCPD. Seeing characters like Harvey Bullock, Maggie Sawyer, and Jason Bard step further into the spotlight is great. These characters rarely get the chance to fully shine when the focus is usually on Batman. With the revelation of the return of another character last issue, Batman is on a very specific mission. There's a quick escalation as what's in store for Gotham is becoming evident.

Even though we saw cameos by other members of the Bat-Family, it was nice to not see them forced into this issue. It's clear they will all have their roles to play and it's cool to see each piece of the story allowed to play out naturally.

Jason Fabok continues to deliver in the art department. When did he start working on this? He manages to capture the right tone as things continue to get darker in Gotham.

It's understandable that as a weekly series, we're going to see more happen at a quicker pace. There was the fear that we'd see things play out too slowly in order to accommodate the weekly schedule. It's almost the opposite. Scott Snyder, James Tynion IV, and the others are not holding back. It is exciting to think about where this story is headed, thanks to BATMAN #28, but the shift in the power structure feels like it's happening really really fast. This isn't to say we'd want weeks and weeks/issues and issues to wait for something to happen but the atmosphere in Gotham has quickly changed.

Gotham City has always had its share of problems and the writers of this series are cranking them up. In the third issue of this weekly series, we're getting to see a lot happen without any lag time. There is the slight feeling that things are escalating a little too quickly but we can easily assume the writers have a lot of story to tell, which is a great thing. New characters are seen and there is a big power shift in Gotham. Batman is going to have his hands full and will definitely need some help from the rest of the Bat-Family. Don't dismiss this as a simple filler weekly comic. Things are happening in big ways. This is definitely affecting the Bat-Universe and shouldn't be missed. 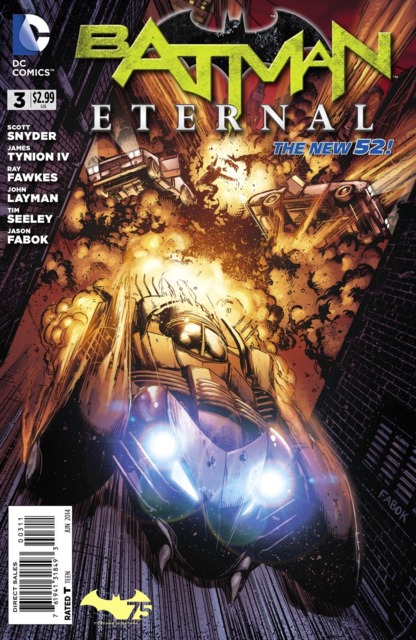