Hush’s play goes deeper and deeper while Bard finally gets what he wants.

Another week, another great installment of BATMAN ETERNAL from some of the Dark Knight and company’s best and brightest writers and what we’re getting now is the reunion twenty five issues, and half a year, in the making. Scott Snyder, James Tynion IV, Ray Fawkes, Kyle Higgins, and Tim Seeley have been delivering the goods every week (with varying degrees of success, but far more hits than misses) and this is still another in that long, proud line. We see the immediate fallout from the incident at the tower as well as the Gotham Gazette releasing a story about a series of orchestrated terror attacks that leave Gotham in the grips of near-anarchic riots. An early encounter with Red Robin and the newly minted Taser Girl let us know that there are still forces working to contain it, but they’re obviously stretched to their limit and it looks like they only option is to come together. We also finally see Hush and Bats meet face-to-face (kinda) where Hush appears to both gloat and spring a trap he himself doubts the effectiveness of. We also find out who’s, supposedly, behind the bandages, but even that could be still another misdirect. The way the characters circle one another leads to an immensely satisfying conclusion with plenty more story to tell.

R.M. Guera steps up on at and WOW, where has this guy been all our lives? He’s a perfect fit for this book’s full return to Gotham in all its gritty, blasted squalor. His character designs have an exaggerated, but not cartoonish, quality that reinforces the general surrealism that exists, bubbling just under the surface of every Batman story (let’s not forget: this is a world that features both Mafia-style organized crime and a giant crocodile man). Guera makes it hard-eged and dark where it needs to be but injects plenty of smooth fluidity where appropriate, which is surprisingly often. Giulia Brusco’s colors are exactly what this issue needs: they are dour, they are grim, they are understated. They make the sometimes-outrageous Bat-family costumes actually look like they belong in this universe: another fascinating combination of the hyperreal and the unreal.

The meeting between Batman and Hush, while having a lot of surface-level dramatic impact, does very little in the way of building character or motivation. Or even endgame, for that matter. I appreciate that the badguy doesn't just spill his guts about his evil plan, James Bond-style, but it renders the whole meeting a little bit toothless. Apparently next issue gives us our first look at Hush’s New-52 origins, but it really feels like that issue should have come before this one. Hush himself is also a bit more grandiose and theatrical than the character has been when he’s been well-written in the past. I often got the impression that most of Hush’s lines could be whispered, playing into his name, and I know this is a new version of him, but full-throated shouting and grand gestures remove some of his sinister mystique.

The complaints about Hush are a little more fanboyish than I’d like, but since we’re not getting his origin until next issue, I have to judge him based on my previous experiences as this is storyline is the first we’ve seen of him in the New-52. The rest of the issue stands up amazingly well, I’m particularly loving the banter between family members we haven’t seen much of together (Jason Todd and Tim Drake NEED their own spin-off) and I’m enjoying the development of Harper Row. It’s also very cool to see that there’s still a villain or two that can keep Batman on his heels, ever off-balance. It has a humanizing quality, and that’s what’s at the heart of most great Batman tales. 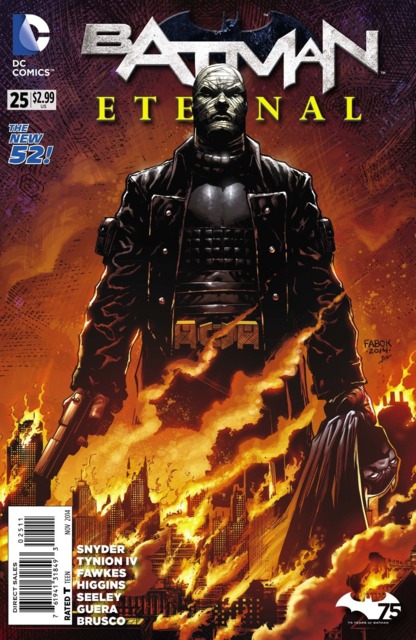