This is where almost everything changes.

BATMAN ETERNAL and its weekly schedule has been setting the stage for Gotham City and the Batman Universe. There's been times it's felt like either too much was happening or not enough in a single issue. This issue definitely hits us with a lot.

With the weekly schedule, we're seeing some big changes. For example, it feels like Jason Bard just arrived at Gotham and he's moved up big time. Carmine's story has zipped by us as well. The changes we're seeing gives this an end-of-act-one feeling. At the same time, we clearly see big changes on the horizon. James Tynion IV and the Bat-crew have pulled out some big guns. Characters you wouldn't expect to see are showing up. Things have slowly been getting dark in Gotham but we're seeing none of that compares to what may be coming up.

Jason Fabok does a great job on the art. It's great seeing the detail in Alfred's face as he struggles with keeping secrets from his daughter or that crazy full page reveal of a character we wondered about and has now been revealed.

It might be hard to believe but there's almost too much going on here. We're seeing characters revealed or making their return and secrets and betrayals are being revealed. There's a lot of jumping around from scene to scene or character to character. It's almost the opposite with what we've had in some issues. This is a weekly book and it feels like a lot was crammed into this one issue as if there was a time crunch. We barely get the chance to process the big happenings.

This issue shows that it is definitely on in Gotham City. Batman might think he has all the answers but we're seeing a whole new game is about to begin. With the weekly schedule, it can be easy to get behind an issue or two. This one shows you why you can't let it happen. Jason Fabok's art captures each moment with brilliance. The next phase of the overall story is being presented here and you won't want to miss it. Some of the developments and betrayals feel like a bit much but we're definitely on board to see what could possibly happen next. 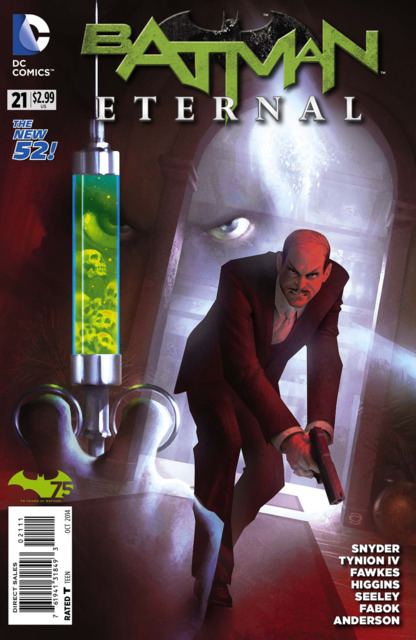