Gotham City has suffered a catastrophe and if that wasn't bad enough, wait until you see who comes to town.

Something bad has happened in Gotham City. That's nothing new but what makes this different is who is responsible. As Batman puts it, "This is more than an accident." With the situation being what it is and the idea that there is more going on, we see a call to arms. There are many that call, or have called, Gotham City home. This is a great series to allow those characters to step into the spotlight without making this a huge crossover event that could disrupt ongoing stories. Having Scott Snyder and James Tynion IV writing it, along with Ray Fawkes, John Layman, and Tim Seeley, you know everyone is going to have the right feel when they appear.

Most of the time in Batman comics, the focus has to be on Batman. Despite having his name in the title, it's clear that he won't be front and center the entire time. As the story unfolds, we also see the introduction to a couple characters you wouldn't expect to see here. The first issue was fun and set up the current mess in Gotham but here, you see just how serious it's going to get. It's like they're not just kicking things up a notch but rather, half a dozen notches. Gotham City hasn't seen anything yet.

Jason Fabok does a great job capturing the look and feeling for all the characters. He doesn't skip a beat introducing all the players, making each one different as well as showing everything else going on in the city. Brad Anderson's colors also sets the somber tone the story calls for. You can really get a feel for how bleak things are going to get.

There's not much to complain about. Some have questioned the need for a weekly Batman comic but this one shows just how much explosive potential there is.

What can we expect in BATMAN ETERNAL? This issue is a good indication. There's a lot going on and clearly a lot headed our way. You can see why this story will work nicely in a weekly format. Besides the expected appearances from team Batman, we see some new faces arrive in Gotham and that guarantees things are going to get even more intense. If you like Batman, there's no way you can avoid this series. This is just the beginning and it's clearly going to get even crazier. What else would you expect from this creative team? 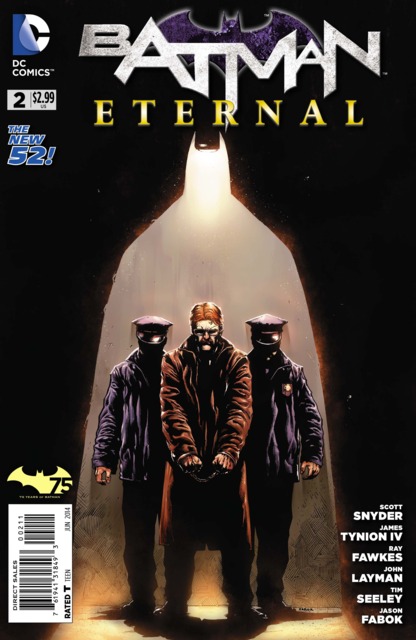