It all begins here. Because you can never have too much Batman (NEVER), the new weekly series is here and starts off with a bang.

There's some big and bad things headed to Gotham City. Batman can never be happy and Scott Snyder and James Tynion IV are setting things up to make sure that status quo sticks. The idea of a weekly Batman series seems daunting. We saw a glimpse in the recent BATMAN #28 and the first page guarantees a bad time for Bruce and Gotham.

One of the immediate nice things you'll notice is this series isn't going to be just about Batman. Sure, we all love the Dark Knight but he does have a few other books on the shelves. Seeing the Gotham City Police Department play a bigger role is a nice way to start out. You could even say the main character of this issue isn't Batman. It's no joke, things are getting shaken up. BATMAN: ETERNAL isn't going to be a throw away series. This is shaking up the Bat-Universe and it's going to be an exciting time.

Jason Fabok gives us a powerful intro to the series. There's a lot of big action and the characters look majestic. You'll find yourself pausing and hovering over each panel, taking in all the detail.

Obviously with a weekly series, pacing will be a factor in the series. We can't get everything at once and this is setting up the series.

Part of the excitement in the developments in this issue were given away. We saw the "Thanksgiving" issue with a pretty big hint for what's in store for Jim Gordon. Also, seeing the Channel 52 spoiler in the back of all DC titles last week (and this week) takes away the intensity of the moment.

There have been some debating whether or not to get into the new weekly Batman title. If you're reading the Batman titles, you won't want to miss what is starting out here. Scott Snyder, James Tynion IV, and the others are ready to shake Gotham City to its core. This won't be a series you'll want to miss. The nice thing is it appears it won't simply focus on Batman. There are so many other great characters in the Bat-Universe as well and this could be a great way to give them the focus they deserve. This issue shows promise that the series will deliver deep stories and doesn't just try to entice you with gimmicks or insane explosions, although there are some really pretty ones here. Jason Fabok's art is killer here. It's a great time to be a Batman fan. 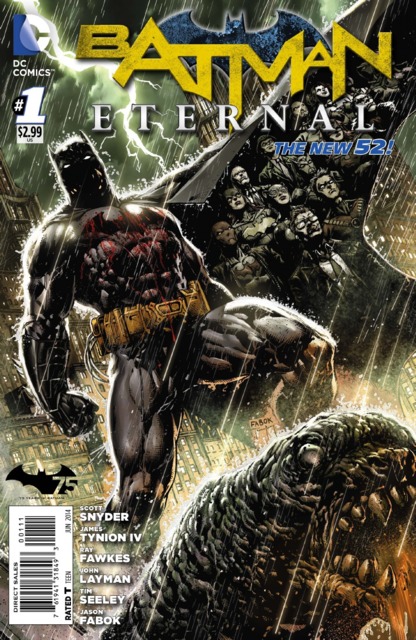