Get ready to experience Batman in a way we don't often get to see these days. Batman in black and white gives us a different way to look at his adventures.

The first story is by Chip Kidd with art by Frank Cho. There is such a nostalgic feeling to Cho's art and a surprise guest appearance. This is the sort of story that couldn't be told in a regular Batman title.

"Batman Zombie" by Neal Adams is a trip. The story is in pure penciled form and is absolutely amazing to see. The story is one that will have you scratching your head until you figure out the hook. It's a great take and message for Batman. Again, it's something that would never fit into a regular story.

The third story by Joe Quinones and Maris Wicks gives a fun look at Harley and Poison Ivy. Batman is involved as well as he tries to get to the bottom of what's going on.

It's no surprise that my favorite story is the one by John Arcudi with art by Sean Murphy. Murphy's art takes the whole Batman universe to another level. With a fun and almost straight forward story, you'll still find yourself completely immersed with what's going on.

The final story is by Howard Mackie and Chris Samnee. One of Batman's troubled foes is on the loose and it's an interesting take on what he's going through. Samnee's art always amazes me.

It's also worth noting we get a great penciled cover by Marc Silvestri and interior cover by Phil Noto.

Some of the stories were simply too short. The first felt as if it had an abrupt ending and I had to go back and figure out what exactly happened on the final page. Neal Adams story is a little on the strange side but there is a nice message.

It is nice being able to see the different writers and artists working on these stories but they could have benefited from perhaps one less story with those pages being dispersed to the remaining.

BATMAN BLACK AND WHITE has always been a showcase of remarkable Batman stories told by several creators in the industry. The nature of being told in black and white gives each story a unique feeling. These are stories that fit in anywhere and anyone can easily jump right in. The lack of color adds a different feeling to the atmosphere of the character and you really see Batman in a new light. Each story here is a blast. The only downside is having five stories resulted in some feeling a little rushed. This is a great way to see different types of stories told and lack of color (and inks in some cases) gives the story an almost raw and honest feel. Colors in comics can add an incredible amount of life to stories but there is something honest to this format. It's an honest look at who Batman is. There's no need for flashy bells and whistles because the story and art are all you need. Every Batman fan needs to experience Batman in this fashion. 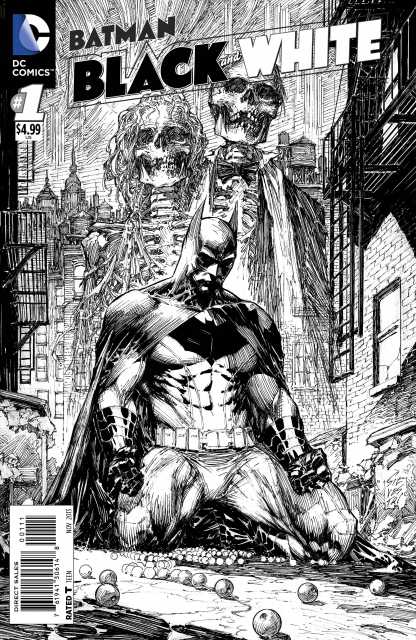