It's the next chapter for Batman Beyond and Justice League Beyond. You'll want to see what Kyle Higgins and Christos Gage are setting up here.

Every once in a while I need to stop what I'm doing and thank the powers that be for the fact that we're getting this continuation of the Batman Beyond characters. It was an amazing animated series and deserves to have a place in the comics market.

Starting out as a digital first series, actually two separate ones (BATMAN BEYOND 2.0 by Kyle Higgins and JUSTICE LEAGUE BEYOND 2.0), the printed form combines 'issues' from the two in a fitting manner.

BATMAN BEYOND 2.0 was first released on August 3. (You can check out my review for the first chapter HERE, spoiler: it was a five out of five). What Kyle Higgins is doing is taking the characters one year after the previous series. This allows for some new developments (hopefully you didn't get spoiled by that big twist at the end) and more mysteries. Simply put, Higgins gets Batman Beyond. You can immediately tell he understands the vibe of the universe and you can feel his enthusiasm bubbling beneath the surface of the comic.

Christos Gage handles the JUSTICE LEAGUE BEYOND portion. We do have Terry McGinnis here since he is part of the team and there is another connection between the two involving a conversation Superman has. There is a new problem the team has to deal with and we'll have to wait to see what happens.

The BATMAN BEYOND portion hits the ground running. We're off to a great start and those reading this in print might have a hard time waiting and may want to go to the digital first editions. Since we only get one chapter of JUSTICE LEAGUE BEYOND, it's not as powerful of a beginning. The characters are all present but it's not quite enough to spark the excitement that BB does. Terry's appearance with the team makes sense in the context and history of the previous series but it felt a little off compared to what's going on in Higgins portion.

There's no need to stick to the present in the DC Universe. Kyle Higgins and Christos Gage are carrying on the tradition of the Batman Beyond characters in their latest stories first appearing digitally. Taking place one year after the previous series, we're seeing where the characters are now and there are some new developments happening. Both series capture the essence of the characters. Whether you like the idea of the digital first comics or still prefer to strictly remain with printed comics, DC is making sure you get to keep up with the latest adventures in the (possible) future of the DC Universe (or at least the Animated Universe). Don't miss out on the fun. 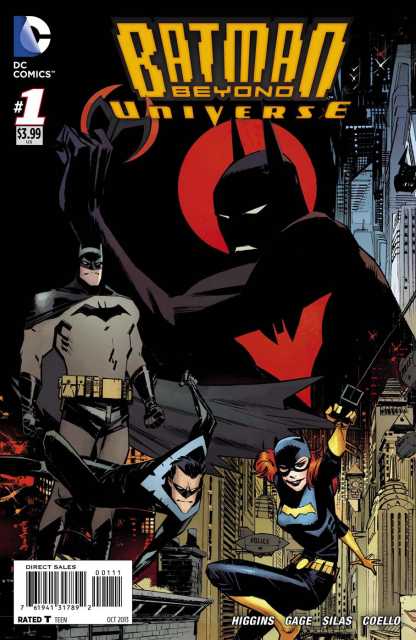