Batman (Terry McGinnis) suffered a near defeat. Find out his fate and who's helping to watch over Neo-Gotham.

The action continues as the pandemonium from Rewire's attack on Neo-Gotham. We saw this new villain team up with some of Batman's former foes, including Shriek, Spellbinder, Inque and Ghoul. It's no wonder that Terry found himself nearly defeated trying to take on all of them plus the other escaped inmates from the Arkham Institute.

Kyle Higgins further illustrates his grasp on the characters and universe. Even though we're all here for Terry, we're reminded at how rich this universe is and seeing Barbara Gordon, Dick Grayson and even Bruce Wayne reminds us this isn't just about the person dressed as Batman. Seeing Dick and Barbara have some of the action is great for long time fans. Who Terry gets help from is interesting as well and further expands on the mystery of what happened in the period between this series and the previous.

Thony Silas' art continues to capture the feel of this time period and franchise. There's action spread out throughout the chapter and the colors by Andrew Elder make the panels pop off the pages.

My favorite part of this issue was a conversation between Terry and Dick on what it means to be Batman and the dangers, on multiple levels, it can cause. It's a great look at the burden and possible outcomes. It also further explores where Dick stands at this time.

Rewire is proving to be an interesting villain but I'm still on the fence over his motives for his actions. Also his public mention of "my father" makes me wonder if he's concerned about maintaining his secret identity.

It's great having new adventures of Batman Beyond twice a month. Kyle Higgins continues to flesh out this world and is taking the characters further by having Terry move out of Bruce's shadow. You can feel the tension in the air and there's still a lot we need to discover as the story moves forward. Thony Silas' art and Andrew Elder's colors gives each chapter a vibrant feel that makes you almost forget that this was originally an animated series. The twice-a-month format also lets the series focus on the story while also delivering great action scenes. This is an example why I love the digital first format. You don't have to wait as long for the printed version and can access it without having to leave the comfort of your home. With one more chapter left in this first arc, the next issue is bound to be crazy. 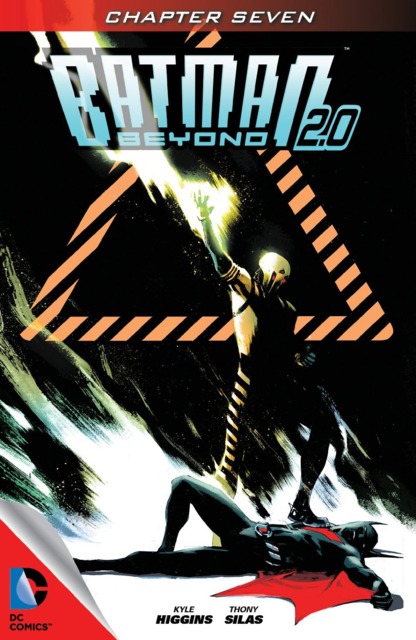