Oh man, the new Arkham Institute is already dealing with its first breakout. The action heats up as Kyle Higgins continues to carve out the future of the future Batman.

Nothing like starting out an issue with full on action. The Arkham Institute contains several of Batman's enemies and with the security compromised, it's not good for Terry or Neo-Gotham.

If you've been reading this series so far, you know Terry now has a new partner helping behind the scenes. Seeing how these two work together is a fascinating change and we can't help but wonder why this change actually occurred. This isn't the only change on deck as Commissioner Gordon (Barbara) comes to the realization that she may be dealing with some changes of her own.

Kyle Higgins does a great job mixing up the action while moving the story forward. He doesn't ignore the different characters that helps make the Batman Beyond universe so fascinating. We can see Terry's dedication and struggle which has always been one factor that made this Batman stand apart from the modern day (Bruce Wayne) version. This isn't just Batman and the Batman Universe in the future. It's about a character in the Batman mantle in his own story.

Thony Silas' art flows through the action nicely. There are some chaotic scenes and you can easily follow what's going on. Andrew Elder's colors enhance each scene and helps creates the vibe that establishes the different locations and time of day.

Even though this series comes out twice a month in this format, I can't help but want more as soon as I finish.

Batman Beyond has always stood apart from the modern day Batman stories. The essence of the character and world was established as more than just taking Batman and the concepts and sticking them in a futuristic fashion. Kyle Higgins gets what this Universe is about and you can feel the story amping up in each chapter. Terry has gone through some changes, including working with a new partner. This evolution is one of the great things about the "2.0" continuation of the franchise. Allowing the characters and world to move forward a meet is making this series fresh and exciting. Thony Silas' art and Andrew Elder's colors sets up the tone of the story and characters nicely. If you've ever longed for more Batman Beyond stories, this is a series you need to check out. Higgins is giving us action and intrigue and each chapter reminds us why we loved the animated series so much. 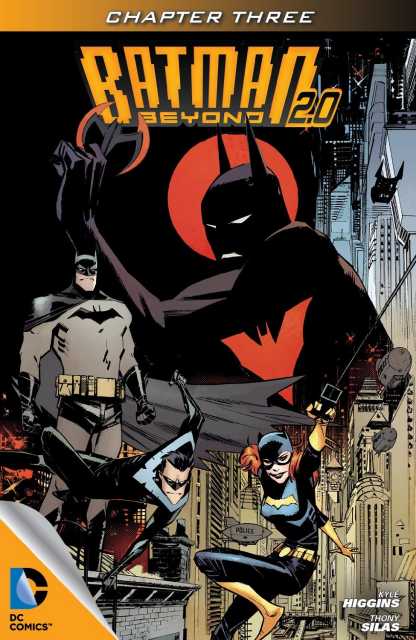