The past is revisited when Phantasm returns to Gotham. But wait to you see the revelations in this chapter!

We're mid-way through the Mark of the Phantasm storyline. When BATMAN BEYOND 2.0 started, time had jumped forward a year. We saw Bruce and Terry at odds with each other. Something happened between the two of them and we had no idea what. This is where we jump back to find out what happened.

There's two sets of revelations going on here. The main one deals with who killed Terry's dad and was Batman aware of who it was? The second goes even further back. This is where Kyle Higgins and Alec Siegel are dancing around touchy areas. You might recall in the animated series there was mention of Bruce and Barbara Gordon having some sort of relationship. It always seemed weird but stranger things have happened in comics. But you only part of the story. Believe me, if you're not reading this storyline, you need to go back and purchase the digital chapters for 25 through this one. Things get pretty nuts.

We have two artists. If you know me, you know that usually really bothers me. Having two great artists helps. Having the different art split over the current story and flashback sequences makes it even better. Phil Hester captures the vibe of the current timeline when everything is being laid out. Craig Rousseau handles the flashbacks with a more animated series feel.

It's a pretty compelling story and there's nothing really to complain about. Things get a little heavy--heavier than the show got, but that's what will grab your attention. This is part of the story we've been waiting to hear.

If you've ever watched Batman Beyond or Batman: The Animated Series, you really need to be reading BATMAN BEYOND 2.0. Kyle Higgins and Alec Siegel are giving fans what they want. With the return of Phantasm, secrets behind Terry McGinnis' father's death, and revelations between Bruce and Barbara along with mention of Tim Drake's fate at the hands of the Joker, this storyline is not one to be missed. Phil Hester and Craig Rousseau are handling the art beautifully. If you haven't been reading, do yourself a favor and check it out now. 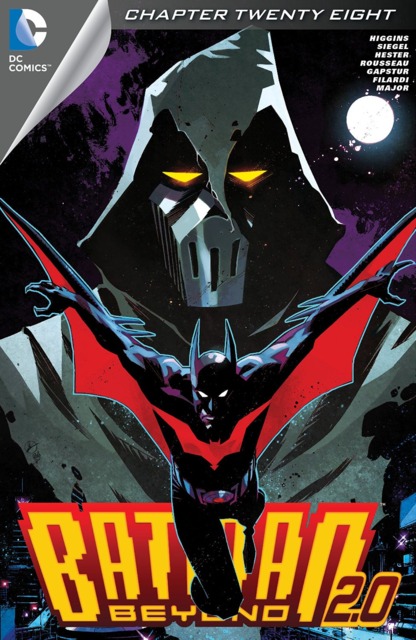