A year has gone by and some things have changed. Check out the beginning of what Kyle Higgins has in store for Batman Beyond.

A year has gone by. At first I was a little unsure how I felt about that notion. After giving it a little thought, I am in favor of the idea.

One thing it does is allow Terry McGinnis to grow and evolve a little more. We are so used to seeing Terry in high school. While that scenario has worked, it's pretty much been the same since the animated series first debuted back in 1999. Terry has done some amazing things during his tenure as Batman and in his time with the Justice League Beyond. But just as Peter Parker eventually graduated high school, Terry must do the same. There will be more flexibility in carving out these new adventures.

The second thing shifting the story a year forward adds is a sense of mystery. Even though Terry is more tenured as Batman now, there's a lot that has happened that we don't know about. This is something you'll see in huge ways in this first issue.

It's not a secret that Kyle Higgins really cares about the Terry. This is an important thing as readers know the characters are in safe hands and it also means Higgins is going to carefully plan out each story. Besides moving things forward a year, Higgins is also ready to establish other changes. The status quo in different areas is now different and part of the fun will be in discovering what those changes are. Getting a glimpse at the new Arkham Institute should definitely be something that will pop up again. Terry's personal life has also gone through some major changes.

And then there's that last page. If you're looking for a "holy crap" moment, this will be one that will knock your socks off. (Do everyone a favor and try not to spoil the ending for others or at least wait until the next issue before discussing).

Thony Silas does a superb job on the art. A problem I've had with the Batman Beyond digital comics in the past is we've sometimes had inconsistent art teams. It was good but just didn't feel right. Silas' art is true to the original look of the animated series.

The same can be said for Higgins' writing of the characters and settings. It's not just some writer creating new tales based on the series. It absolutely feels like a natural evolution of the series. That's what makes this exciting.

You have to dig the cover by Sean Murphy as well!

The only real problem I had was the length and the fact that it's sort of a set up issue. Obviously it has to be a set up issue being the first one and having time skip ahead a year. There is some Batman Beyond action but yeah, I would have liked some more.

As for the length, thats more of a "I want more now!" thing so not really a complaint. You are only paying $0.99 so you definitely get your money's worth.

If you love or even like the idea of Batman Beyond, you need to check this out right now. As part of DC's Digital First series of comics, you need to be prepared to get a great next chapter of Batman Beyond for less than a buck. You can feel the passion Kyle Higgins has for the characters and universe bubbling under the surface. This may be the first issue that starts to catch us up after the series jumps forward a year but you can see there has to be loads of big things coming. Thony Silas is a great choice for the art. Both Silas and Higgins have captured the essence of the Beyond universe and are ready to take it to the next level. 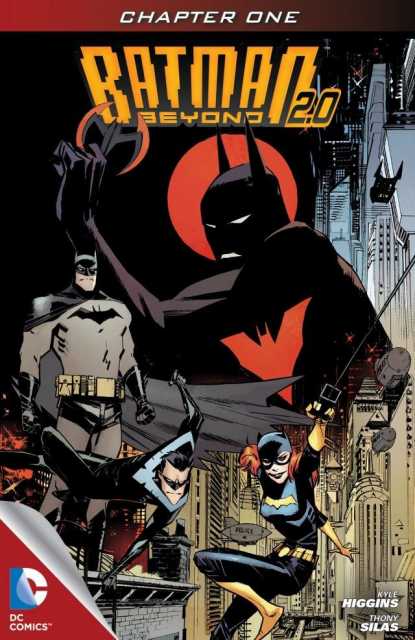