Batman Beyond, the cyberpunk, futuristic, animated take on the Dark Knight was a surprise hit in its time and gave fans some of the most enduring, interesting visuals and ideas for the future of the characters imaginable. Far from being the crass cash-grab it at first appeared, it was filled to the brim not just with action and thrills, but a real emotional core as an aging Bruce Wayne attempts to ensure his legacy and a young Terry McGinnis struggles to be Batman while not living it the same way Bruce did. This first issue does something very daring and very, very risky: it takes everything that was known and established about that universe and throws out 99% of it. Dan Jurgens shows a much, much darker and even more dystopic vision of Gotham’s future, wherein it’s one of the only cities still standing and inhabitable as a result of McGinnis going back in time and muddling things about. Jurgens’ take looks to be much less Neuromancer and much more Fallout in its approach to the world that this new Batman finds himself in and Jurgens also does well by having Bats’ onboard AI have enough personality to make a good foil, keeping him out of his own head for too long.

Bernard Chang’s art is the real shining gem here, though. Cartoonish without being silly, animated without being confusing and razor-sharp without losing its human edge, it is everything this issue needed it to be to make a fantastic first impression. The issue opens with an amazingly choreographed action setpiece that sets the stage for this vision of Gotham as familiar enough, but drops enough clues to indicate something has definitely gone horribly awry. There’s another one closer to the end, a more one-on-one affair, that’s far more hard-hitting and desperate, this time letting the reader know that Bats isn’t even close to the most dangerous thing in this world. Paired with colorist Marcelo Maiolo, who brings back his signature two-toned panels for especially dramatic moments, as well as rendering a tremendous amount of detail in every single panel. The post-apocalyptic wasteland has scarcely looked so beautiful.

It’s difficult to divorce this title from its original source material and, to be fair, using the same title with the same suit isn’t exactly discouraging the comparison. It’s not that this is a bad issue, far from it. The story gets a lot right and the art is gorgeous, but Batman Beyond’s setting was so integral to the storytelling and characters that seeing it become another “post-apocalypse wasteland” book is still disappointing, particularly as the shelves now seems flush with those while “sleek, cyberpunk neon” is in short supply. There's also the loss of the singularly unique dynamic between McGinnis and Wayne that helped define so much of the appeal of Beyond.

Bats interacts with precious few characters in a non-violent way, but the main two he talks with aren’t necessarily known or stand out overmuch, so it’s difficult to get a bead on exactly what their existing relationship is and what the stakes are for them, though the last word certainly opens the door for plenty of intrigue.

If you’re a superfan of Batman Beyond, this is still very much worth a look, but adjust your expectations. Don’t necessarily point them down, this is still a good book very worth reading, but don’t expect to know everything right off the bat (yeah, I said it). The art does a fantastic job of drawing the reader into this new status quo and softens the blow quite a bit while the writing gets a lot of sympathy for this new Batman very quickly. And if you have no previous franchise investment, then by ALL means give this issue a look. It is an intriguing start to what will hopefully be a great new direction for the character. 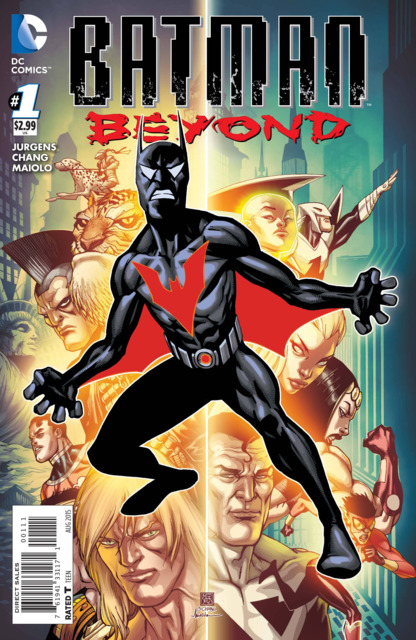