The newest straight-to-video release has the Batfamily working together.

Batman is either missing or dead and only Batwoman saw what happened. Nightwing dawns the cowl and heads off to find out what happened to Bruce with Robin by his side. There are some minor "duh" spoilers here. They'll be blacked out for your safety.

"Bad Blood" takes the story of Bruce Wayne dying and changes it up a bit, so Darkseid doesn't have to be involved and there's also no Bruce Wayne traveling through time. The story is a lot more streamlined and in addition to setting these events within a 74-minute film, it also continues to expand upon the Gotham universe by adding Batwoman and Batwing. Also, there's a bit of Renee Montoya in here. "Bad Blood" doesn't try to change anything when it comes to Batwoman and Renee Montoya. Both of those characters are interested in each other, and while it may not seem like much, adding a romantic relationship between them is really cool, as they were both linked together in the comics.

The thing that's cool about this story is that even if you're familiar with all the events leading up to Battle for the Cowl, this story still feels new with a lot of familiar elements. The Damian clones are here, in a sense, and we get to see Batwing on the scene for the first time, but it's all presented in a brand new package. The story will excite those who follow the comics closely, as well as provide those new to this story a lot to bite into. However, while we've discussed the familiar elements in this film, the story, as a whole, is really something new that stands on its own. Sure, you can see that certain scenes and moments are straight out of the comics, but overall, this story is a concoction of Batman moments and it works exceptionally well.

The Batman animated films have been building off one another, so while a new fan may pick this up expecting a single, stand-alone film, they'd be partially right, but this film actually works as a part 3 to the current run of Batman films, following Son of Batman and Batman vs Robin. These films really center around Damian Wayne popping into Bruce Wayne's life. Again, this film works fine on its own, but there's a great appreciation for these character's journeys and trials if you watch Bad Blood after the other two films.

There's this great turning point where Bruce Wayne is rescued, and the film could be over right there; however, there's a whole other story coming down the bend and an epic final battle. It's essentially a whole extra 10-15 minutes as the villain's plan comes together and a great fight scene as well. The choice of villains in this film is pretty interesting as well. Without giving away the main villain, we get to see Firefly, Killer Moth, Mad Hatter, and Tusk. Mad Hatter is used exceptionally well as a villain and not as much a crony. He has a real purpose compared to the other villains which are there more for smashing heroes.

The main problem comes from the fact that this film flies by. It only clocks in at 74 minutes, with the previous film Batman vs Robin coming in at 80 minutes, so at times, the story feels a bit rushed and has little time to breathe. Pacing becomes an issue and the one big thing that could have been spread out a little more is the supposed death of Batman. It feels like it's revealed a bit too early that he's alive and said reveal would have worked a bit better if everyone realized he's alive much later. Because things are tight with time, there are lots of moments that feel condensed.

Overall, Batman: Bad Blood is easily the best of the three recent Batman animated films. It continues to build on this version of the Bat-Family, all while delivering a pretty fantastic story. The animation style works exceptionally well for these characters, and while pacing becomes a problematic part of the film, Bad Blood delivers a pretty fantastic story. If you liked Son of Batman and Batman vs Robin, you need this film in your collection.

Check out this clip from the upcoming movie featuring Batwoman.

Batman: Bad Blood is available on DVD and Blu-Ray on February 2. 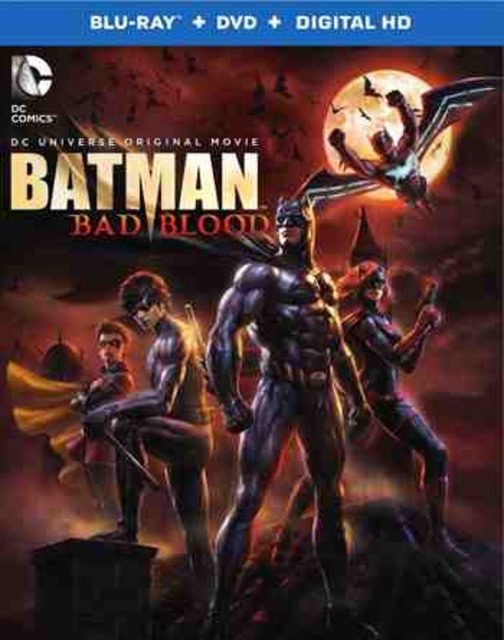