The Suicide Squad has their latest task: break into Arkham Asylum. When Batman and Joker are brought into the mix, you can bet their mission won't be easy.

Right when Batman: Assault on Arkham hits you with its character introductions, you can tell this is a totally different kind of DC animated movie and it's one that the team likely had a total blast creating. When dealing with the Suicide Squad, one might expect a movie that has an overwhelming dark and gritty atmosphere. And while there is plenty of violence and twisted material to go around, writer Heath Corson and directors Jay Oliva and Ethan Spaulding focused on making this an entertaining adventure that is heavily influenced by the comedic heist genre.

Because of the amusing tone (which of course has an appropriately funky or energetic and upbeat score at times), Batman: Assault on Arkham is able to feel like a mostly unique experience while also including everything we've come to expect from a DC animated film. There's great action, Batman definitely has his moments, and there's a ton of fan service. Fans of the video game franchise will absolutely recognize several locations and, well, let's just say they bring a lot of fan service with the final scene at the Asylum. For the most part, the celebration of the comedic heist genre works very well, but I will admit the occasional tonal shift was a little jarring (if we jumped from from intense electronic music to a score that matches the Arkham franchise's environment). Still, the focus on making this group's suicidal mission enjoyable instead of bleak really allows it to stand apart from other DC animated movies.

Sure, the recent project Justice League: War was also about big fun, but that was done through spectacle and popcorn entertainment. This one is embracing that same level of fun and excitement but in a totally different way. There's plenty of heist tropes to go around (the team walking together at a way slower pace just looked a little odd instead of cool), but it's still a good ride and you can really tell they had a great time directing this one and really tried to spice things up with different kinds of shots.

I won't spoil anything, but let's just say this Deadshot fan is very pleased. Batman gets his due and has quite a few cool bits (especially when he fights the team), but Floyd Lawton (voiced by Neal McDonough) leads the way and they gave this guy a bunch of jaw-dropping moments. From his increasingly violent rivalry with Captain Boomerang to his conflict with Batman's most famous fiend, the team behind this one did a stellar job putting this assassin front and center. Truthfully, some of his dialogue felt a little cliche, but overall, they more than succeeded in making him this movie's true badass and memorable lead. In the end, this really feels like a love letter to Deadshot. As for the rest of the cast, the movie basically celebrates the primary characteristics you'd expect from them. Harley's always enjoying the madness and this produces more than a few amusing gags; King Shark's blunt and John DiMaggio makes sure some of his line are hysterical (I loved his chanting as two teammates were fighting); Black Spider there's for thrilling melees; Captain Boomerang's arrogant and sarcastic; and Killer Frost's there for her powers and to give King Shark a little more depth. Truthfully, it feels like Frost received the least focus out of the main group, but she still has a moment or two to shine. There's a number of other characters, but don't worry, I won't spoil the cameos!

As expected, Kevin Conroy is awesome as Batman and Troy Baker continues to prove he's a terrific Joker. Don't worry, Batman is a secondary character but they're still able to give him a proper amount of time and Conroy's stern and formidable performance lives up to expectations. His action scenes are ridiculously enjoyable, too. Watching him systemically take down armed forces was beyond exciting and there's some very well executed hand-to-hand fights. It's a little odd to see Batman somewhat struggle with a nameless soldier, but honestly, the scene is presented so well and it's delightfully frenetic. Baker's so charismatic as the Clown Prince of Crime and does a stellar job finding the right balance between levity and horrific darkness. There's a few lines from him that had the audience erupt in laughter and applause. This movie's all about the Suicide Squad, but the minds behind this movie truly did a praiseworthy job implementing these two iconic characters and making sure their inclusions are a ton of fun.

There were a few noticeable inconsistencies in action scenes and they were a bit distracting. They aren't a big deal -- not by any means -- but they're worth at least noting. For example, King Shark's durability is all over the place (he goes from being harmed by melee attacks to being bulletproof to having bullets penetrate him). There's another brute force character that goes from needing to block bullets with gauntlets to charging through a sea of assault rifle attacks like its apparently nothing. It's also a little odd to establish Deadshot as this supremely gifted marksman but then have him essentially spray and pray at times or miss with some shots that would seem easy for him. Minor gripe: they made a point of telling audiences Black Spider thinks he's a vigilante, but then he apparently snaps an Arkham employee's neck and is cool with killing others in an explosion? You'd think he'd be against that and try to find another way to accomplish his part of the plan?

Honestly, the narrative here isn't ever that compelling and the twists definitely won't surprise you. There's on moment where Riddler's talking about how he's surprised the team hasn't solved something yet, but the twist was made pretty obvious several scenes back. Now, it's obvious this movie's all about giving us a good time, but it's worth noting that it often feels like the plot exists solely to move us from one action scene to the next.

Parents, this one certainly earns its PG-13 rating. If you're not cool with your kid witnessing some graphic violence, cursing and sexual situations, I'd strongly recommend watching this one without them.

Batman: Assault on Arkham is absolutely worthy of your time and attention. It embraces the popular video game franchise with open arms and has a ridiculous amount of fun playing with the world's various characters. The story may not blow you away and there's a few static moments, but it's a thrilling ride that's packed with exciting action and massively amusing relationships between characters. They took a risk making this latest effort so heavily influenced by movies like Ocean's Eleven and Snatch, but it paid off and the end result is an exhilarating and memorable adventure. This is a movie that I'm absolutely going to rewatch once it comes out on Blu-ray. 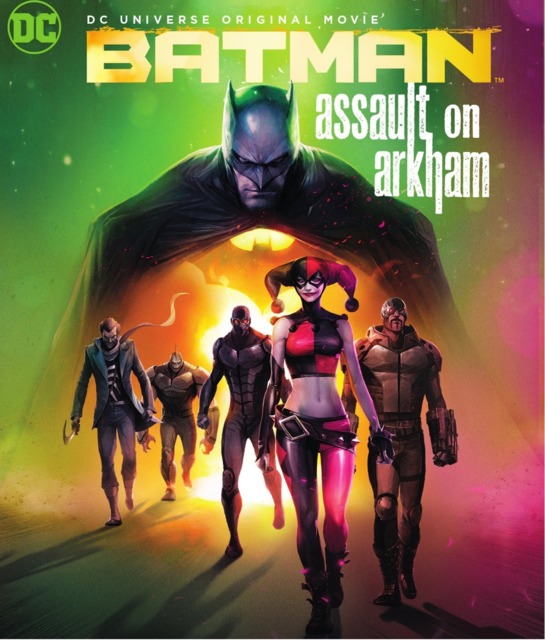