What happens if the Joker decides he wants to be your friend?

Who doesn't love a good Joker story? The interesting thing about Joker in the New 52 is, we haven't really seen too many actual Joker stories. Some might feel that's a crazy statement but if you think about it, we only really had two main stories, Death of the Family and the current Endgame arc. Joker did appear in 2011's DETECTIVE COMICS #1 but then wasn't really seen until his return after his face was cut off. Despite having Endgame on the cover, this focuses more on just the Joker.

James Tynion IV has the task of delving into who Joker is and what he's capable of. Starting off 'five years ago,' we get some glimpses into Joker's activities over the years. When a reporter looks into uncovering more about the Joker, Joker forms a twisted attachment to him. You can imagine how something like that might go.

Tynion gets the chance to showcase Joker's brutal nature without making the story feel like it's going over the top. He manages to make Joker feel extremely frightening at a more psychological level. If you've read my past reviews, you know I enjoyed Death of the Family and I'm loving Endgame. It is also refreshing to be able to see Joker in a smaller setting. Seeing him go after someone other than Batman is pretty creepy.

I wasn't familiar with Roge Antonio's art before. He has an interesting style that gives us a mix of an angry yet playful Joker. It might sound like a weird combination but it works for Joker. It's interesting to see the flashback sequences and adventures over the year as the story builds. It makes you stop and think about all the other possible adventures we're simply not aware of. This is something we haven't really thought about since the New 52 began.

There is a tiny bit leading up to Endgame towards the end. This is really just a pure Joker story instead of a firm connection to the current arc. Being labeled as part of Endgame could be a good or bad thing depending on whether or not readers want an annual tied to the event or not.

There were some moments the art left me wondering a little. It might be an editorial decision but the idea that Harley Quinn has been wearing her same current outfit for the past "five years" is a little unsettling. It would've been nice to see some variation and possibly even her original outfit used. There were also some instances when the colors felt too vibrant considering the tone was more on the dark side.

There is also the problems with a specific "five years ago" timeline. This has been bothersome to some readers since the New 52 started. It's a little confusing because now we're not entirely sure how many years have actually passed since the New 52 started. Are we to assume the opening with Joker took place during the same time Darkseid attacked in the first JUSTICE LEAGUE arc or is this now a year or two after those events? It's a minor concern but can be problematic if you allow yourself to think about it.

If you've been looking for some pure Joker wackiness without being tied to a huge story event, this is the issue for you. Despite being labeled as part of Endgame, it's really more of a self-contained story that slightly leads up Joker's current standing. James Tynion IV delivers some refreshing and twisted moments in Joker's life as we see what it means to be friends with him. The art by Roge Antonio gives us a nice different take on Joker over the years. If you've been wondering what Joker's been up to when not involved in a long battle against Batman, this is an issue you'll want to check out. 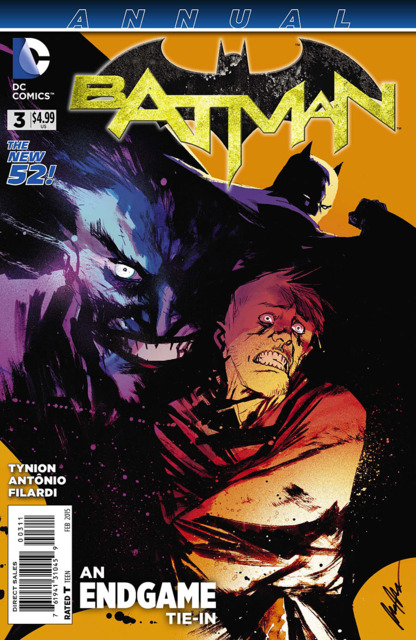