Batman is put to the test as he is locked up in Arkham Asylum. The attention of a certain inmate sets out to get in the way of Batman's plans.

When the preview for this issue was released, we only saw that Batman seemingly turned himself in to be locked up at Arkham Asylum. It's an odd way to start out the annual and soon gives us a different look at the place.

The reason why Batman is being locked up at the Asylum might be a tiny bit of a spoiler but it also makes for a great topic in the story. The truth is Batman has allowed himself to be locked up at the asylum in order to help test the facility. This is pure brilliance.

How many times have we discussed the fact that inmates (especially the Joker) simply come and go as they please from Arkham. Seeing Batman actually take part in assessing their security and offering advice or pointing out weaknesses is fantastic.

It's through this test that Batman catches the interest of an inmate we haven't seen before. The reason for a conflict between the two soon develops and it creates an interesting look at both characters.

The story is by Scott Snyder and Marguerite Bennett by written by Bennett. It definitely has the proper Batman feel to it and the glimpses we see into Batman's mind, reflecting on his recent past events is great.

Wes Craig's interpretation of Arkham makes it a formidable place. For all the deadly villains locked up there, this is the sort of place you would expect to see. Hopefully Bruce Wayne is helping to cover some of the costs in running the place.

This was a case when seeing Batman in brighter lit areas makes him look a little weird. Craig's pencils are good but there were moments when the New 52 costume looks a little weird on Bruce.

There is a loose tie to Zero Year. It does feel a little forced despite Snyder's involvement with the story.

The motive for "villain" was okay. It gave us an interesting story but was a little extreme. Poor Batman was only trying to do the right thing.

I wasn't sure of the time frame right away. With the mention of Zero Year on the cover, I was briefly under the impression that this whole story took place back in that time. Seeing a costumed Batman was confusing until it became clear that it was occurring in the present.

It's a wonderful thing to have an annual that has a self-contained story. Set in Arkham Asylum, Scott Snyder and Marguerite set up a long overdue story and it's about time Batman takes some responsibility for the enemies he's sent there. The new "villain" introduced might have some questionable motives but it gives us the opportunity to see Batman face a new threat. This is a slightly different Batman story than we normally see. Delving into who Batman is as he fights a villain he's not completely prepared for, the story grabs your attention and you'll definitely want to see how it all plays out. 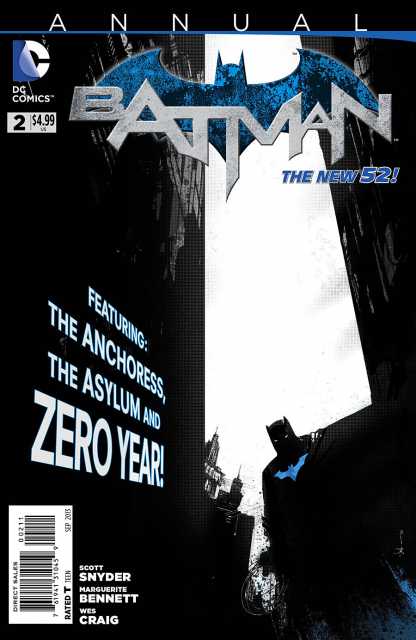