Bruce Wayne must be saved!

Assassins are after Bruce Wayne and it's up to Dick Grayson, Batgirl, and the team from WE ARE ROBIN to save him.

Something that's really worked for this book, in the month that it's been around, is that it takes all the heroes of Gotham, all of which have a connection to Batman, one way or another, and has them working together. In this issue, we finally get to see Batgirl and We Are Robin working with Dick Grayson to save Bruce Wayne from the assassins. At the same time, Spoiler, Bluebird, and Cassandra are all working together too, kinda.

Cassandra walks to the beat of her own drum. That's what's really cool about her character. She's a team player but in much more of a leader role, even though she's only said one word since she's shown up. She will take orders from other, which is apparent, but she doesn't have time for small talk. It sure is nice to see her in comics again.

There's a huge reveal at the end of the issue that feels like a real game-changer. We won't go into too much more depth than that but what happens here is pretty nuts.

On the down side of things, this issue does move relatively slow in the second half. The last issue left the reader at a pretty great place and this issue opens up with some great action, but about halfway through, the book's pacing comes to a screeching halt and it's almost like Tynion, Snyder, and Orlando try to do a reverse build, with the action at the forefront. The art in this issue is ok. It's not as great as the first three issues, and overall, it just feels a little flat.

Regardless, BATMAN & ROBIN ETERNAL continues to be an intriguing and worthwhile book. It's a month in and I'm just as engaged with the story as I was with issue one. The team really comes together to help each other out here and finally, all of the "children" of Batman are working together. They've got a great read and I cannot wait for next week's issue. 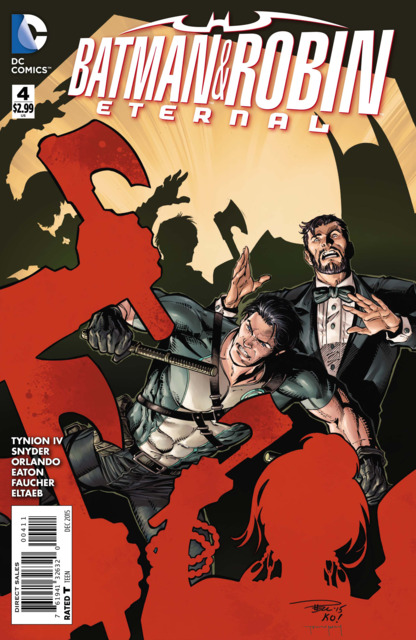