Batman & Robin Eternal #13 - Home Is Where the Heart Is

Cassandra Cain travels to The Nursery and more of her past is revealed.

I've become really skeptical over weekly series. They can be a great way to tell a story but the downside is it's easy to fall behind and sometimes the story meanders. Thankfully that hasn't been the case with BATMAN AND ROBIN ETERNAL. This is a weekly series that has kept my attention and I make sure to never miss an issue.

As I read this issue, featuring a big focus on Cassandra Cain, I realized I'm not as upset as I thought I'd be over her past stories getting rewritten or set aside as part of the New 52 relaunch from 2011. It's likely I'm just being happy that we finally have Cassandra back in the DCU and, so far, she's been depicted pretty well. This series has been a great way to introduce her to new readers and for long time fans to get to know her all over again.

As James Tynion IV and Scott Snyder have Cassandra revisit the Nursery where she was raised, we see more of her upbringing with the Orphan. The mysterious character known as Mother had a weird and twisted scheme going with the way she trained children in her program but Cassandra was forced to remain separate from them. This gives us more insight into the cruel and brutal upbringing she had which makes readers sympathize with her even more. Along with the haunting memories of the place, she has to confront Orphan again and we also get to see her first encounter with another familiar character.

With a weekly series, we get a variety of different artists to handle the schedule. A pleasant surprise was when we found out Marcio Takara was drawing this issue. I've long been a fan of his work and love seeing the way he handles the story along with the flashbacks. Takara has often drawn Bat-characters including Cassandra and I would love to see him back on more issues of this series.

The flashbacks to Cassandra's youth look great and Dean White's colors keeps them separated from the present day moments. Unfortunately this is a moment where the weekly pace of the story falters a little. In some ways it feels like finding out all the details of past and Batman's connection to Mother are taking longer than they should. It's unfolding at a reasonable pace for readers but because we're getting an issue every week, it feels like it's becoming a longer story with some moments drawn out a little longer in order to help fill up the individual issue.

BATMAN AND ROBIN ETERNAL shows that a weekly series can be a success. James Tynion IV and Scott Snyder's story has been captivating as we get more and more revelations of the bigger story week after week. With an issue almost fully dedicated to Cassandra Cain, fans of the character can be overjoyed. The overall story has been great but there have been some moments the weekly schedule makes moments feel drawn out a little. Marcio Takara's art is perfect for a Cassandra-focused issue and Dean White's colors are top notch. We've now reached the half way point of the series and there's still a lot more for us to discover. 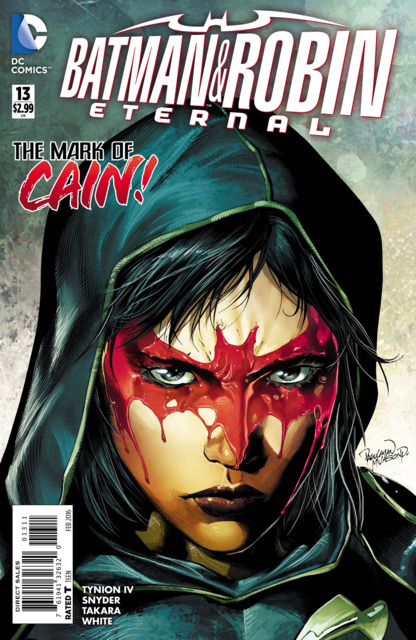