What made Cassandra Cain the way she is today?

This issue is a Cassandra Cain 101. If you're a fan of the character then this is the issue you need to read. Sculptor, who once worked for Mother but is trying to make a change, delves into Bluebird's mind to show her why Cassandra Cain is the way she is.

Conceptually, this is a pretty weird issue and one would wonder if Sculptor going into Harper Row's mind would be necessary. However, a concept and execution are two entirely different things and the execution of the story here is fantastic and wonderfully engaging. Cassandra Cain was never a character I felt an attachment to. She's cool and all, but up until reading this, I could not have cared less about the character. While James Tynion and Scott Snyder plotted out this story, Ed Brisson does a great job with the script and the dialogue between Sculptor and Bluebird really moves this issue alone. There's this great balance of "show" and "tell" here in the issue, creating a really nice flow to the story.

This book also contains two different artists working on it but within the context of the story, it works out nicely. The present day scenes were drawn by Christian Duce, with John Rauch on colors. It really bookends the entire issue and Duce only works on a few pages, but he delivers a lasting impression with his designs. Fernando Blanco does the grunt of the work on the book, taking on the scenes that deal with Cassandra's past with Orphan. Rauch pulls back on the colors a bit to really hit the idea home that this is more of a dreamscape than anything else. Blanco actually does a fine job with delivering an emotionally compelling story through facial expression and the visual medium here. The only real complaint is that some of the page layouts don't lend well to moments where something big happens. It takes away a bit from the impact because a panel sits in an odd place.

There's a couple huge reveal moments in this issue that really hook the reader in, making for an overall really solid issue of this weekly series. BATMAN & ROBIN ETERNAL continues to be a great week-to-week read for those who are fans of all the Batchildren of Gotham. There's enough mystery and intrigue here to keep readers invested. If you've missed out, this is a series you should check out as this book continues to be worth the investment. 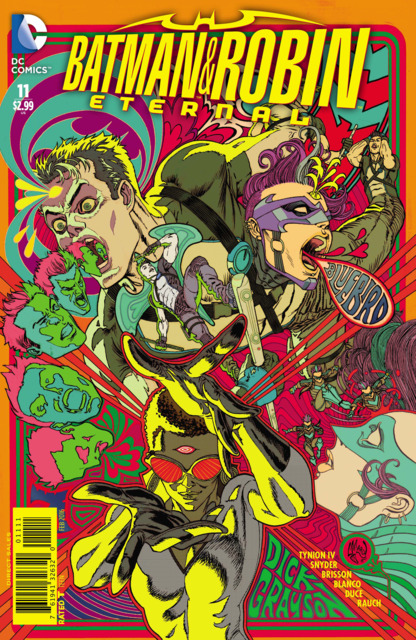