Something from Batman's past is haunting the Bat-family.

In the New 52, Batman has been around for years, and while we've seen his Zero Year of becoming the Batman, there are a lot of missing stories of his adventures early on. Surely, there's something that happened within that time that was downright crazy, right? Well, that's exactly what BATMAN & ROBIN ETERNAL explores.

The book jumps back and forth between present day, where Dick Grayson, an agent of Spyral, has returned to Gotham City and working with Jason Todd and Tim Drake to stop some criminals, and the past where Batman and Robin (Grayson) dealt with Scarecrow. In addition, Harper Row and Batman (Gordon) come head to head. There's actually a whole lot more to the book as well.

As the issue goes on, it's revealed there's a current sinister force or villain (it's hard to tell exactly what's going on. There's lots of mystery) from Dick and Bruce's past that has popped back up, which leads to an incredibly startling reveal page, which is one of the biggest surprises in modern Batman comics.

One of the biggest surprises here is the return of a character that fans have been clamoring for: Cassandra Cain. That's right, after years of nothing, this character returns in a big way, after a pretty awesome fight with Dick Grayson. This character (just trying to avoid spoilers for those who want to stay in the dark) makes an awesome addition to the cast.

This is the first time, in quite some time, where the Bat-Family and the world of Gotham have felt fully realized. Sure, there's numerous Bat-titles out there and there is inter-connection between them, at times, but there's so many characters and concepts within that world at BATMAN & ROBIN ETERNAL utilizes a chunk of the in a story that really works. James Tynion IV and Scott Snyder complete a full picture with this story.

Tony Daniel (pencils), Sandu Florea (inks), and Tomeu Morey (colors) do an amazing job on this issue. The art is full of action and movement. It's clear and crisp and the book has a cinematic element to it that really helps push the story forward. Visually, this is a gorgeous issue, especially that final reveal page.

BATMAN & ROBIN ETERNAL is another great start to a weekly series. There is a ton of stuff going on here and it just makes you want to read more. Tynion, Daniel, and Snyder set this first issue up in a way where there are clues trickling over every page, as the book sets its hooks in. This is the most impressive opening issue for a Bat-title in years. I highly recommend picking this issue up. 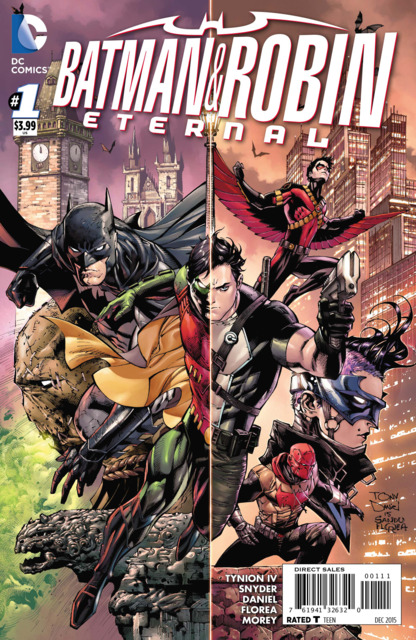