Batman and Robin. Those three words mean something different to all of us. Some of you may think of Batman and Tim Drake. Others may think of Dick Grayson and Damian Wayne. Some may even think of the classic TV show. But if you're talking about Peter Tomasi and Patrick Gleason's take on those three words, it's all about one thing: the powerful bond between a father and his son. This creative team's opening arc, "Born to Kill," tested the relationship between these two Waynes and pushed them both into very dark and violent situations. Now, their last issue of this series (Tomasi still has one annual left, but it's not with Gleason) is here and it shows how much the father-son dynamic (duo) has changed.

Look, we're all confident Damian won't keep the powers forever and that was blatantly implied in the previous issue (you really didn't think so, right?), but just because you're certain Damian will lose them doesn't take away from how it all happens. What starts as a seemingly standard yet enjoyable action sequence quickly turns into something far more sincere, touching, and appropriately lighthearted. The story ends on a note that will make any longtime fan of the series smile, too. Seriously, it's four pages that'll just remind you of all their history together and allow you to really appreciate the situation they're currently in. It's not often something like that happens, but it's well-earned in this case. It's such an appropriate and fun way to end this creative team's time with the series.

It should really come as no surprise by now that the art team does an astonishing job bringing Damian to life. He has such a big personality and they're able to capture it perfectly. There's at least three moments in here where Tomasi lets the art sell the laughs and Gleason, Mick Gray, and John Kalisz definitely deliver. Their handling of the angles and character work in the final four pages is what really allows that moment to shine, too. Even if Tomasi laid out how he wants each shot, they're still able to elevate those moments and make it feel every bit as cinematic as it should. Man, I really love that ending. After all they've been through, they deserve it.

Aquaman's on the cover but he isn't in the comic. Automatic 0-star rating! But seriously, I loved this chapter. My only noteworthy criticism of the art is there's one panel of Billy Batson in which he looks downright sinister. I get he's pumped and anxious to rush into action and do some damage -- the brow and mouth make that crystal clear -- but the eyes seem evil. I think it's because of the heavy shading. There's another "Billy and Damian" panel which makes up for that and then some, though.

Tomasi and Gleason's BATMAN AND ROBIN entered my life with a dramatic, gripping, and emotional story. Now, it's leaving with a fun and moving story that focuses 100% on the father-son dynamic. I'm guessing readers not all that passionate about Damian probably won't enjoy this one as much as I did, but as someone who's been with the series since the very first issue, I can't help but feel like this is an amazing way to conclude the creative team's time with the two heroes. It hits us with just enough explosive action, there's solid laughs that'll fill you with happiness, and there's a great deal of heart. This isn't a big or epic conclusion -- it's all about their relationship and that's what this series was all about. This Damian fan is very happy and it was refreshing to read such a positive and uplifting comic. There wasn't any forced drama or conflict. Instead, it's about a boy who wants to impress his father by doing the best he can, and a father who wants nothing more than to see his son happy. Thanks for the good times, BATMAN AND ROBIN. 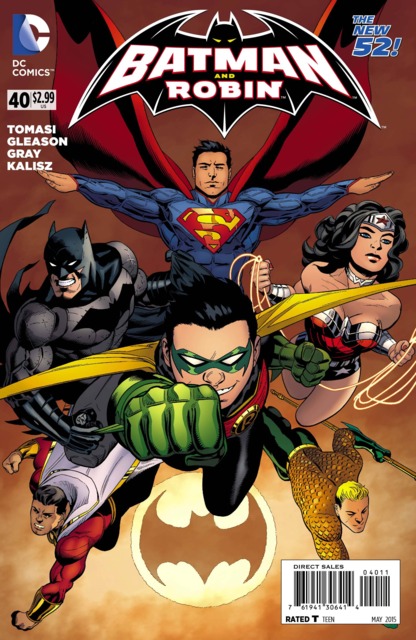