Criminals of Gotham, you can't hide from Robin!

Grant Morrison (and Andy Kubert) may have brought Damian Wayne into this world, but man, Peter J. Tomasi has done brilliant stuff with the little dude. BATMAN AND ROBIN #39 may not feel like a mandatory read, but it sure is nice having Tomasi write a full issue revolving around Batman's son. It has all of the charm and attitude you'd expect from a Damian story. There's even a moment where we blatantly catch him in a lie and the handling of it makes me love the wee lad even more. Damian's just "too cool for school." Also, this issue has best use of the Bat-signal in a long time, I'd say. It may just seem like it's there for laughs, but it also goes to show just how much these powers are getting to Damian's head. After all, who needs stealth when you can plow through any obstacle that's in your way? Little things like the way Batman has to reprimand his son ("down") or the brief interactions they have with Alfred remind me why I love this title so much. It's not just about Batman and Robin beating up villains and goons; it's about Batman and Robin. It's focused on character -- who they are, what they mean to each other -- and not just action. If you're a Damian fan -- and I certainly hope you are if you're reading this -- the ending will most definitely make you smile. Oh, and bonus points for a blatant nod to another character's famous saying.

While it didn't have any big laughs, the brief interactions between Damian and Billy were pretty amusing. You can't help but love how Billy just wants to bond with the kid and Damian wants absolutely nothing to do with him. Having Damian attempt to hide in his hoodie while walking away sold it even more. I'm hoping we'll get more of that in the next issue and thankfully, it seems pretty safe to assume we will.

Patrick Gleason, Mick Gray, and John Kalisz offer a great deal of variety of this one. A dark location oozing in red light; the beauty of space; a tranquil escape from the city. Each of these locations were brought to life in a way that pulled us right into them and made them feel alive. There were plenty of great angles to appreciate and the splash page is a smile-inducing moment, but another area where the art team really stands out is with Damian's expressions. Whether it's making him look intrepid when he's just inches from a frightening character or completely thrilled to be in a certain setting, they're able to sell his personality consistently well with just his face alone.

This is an enjoyable setup issue, but aside from a few teasers, it didn't really feel like it was bringing anything new to the series. It shows us a lot of themes that we've seen before (e.g. Damian playing it cool, Batman struggling to raise him) and it handles them well, but it never really goes above and beyond. It feels kind of like a setup issue that's playing it safe.

Minor criticisms: I get Damian isn't in total control of his powers and that's why he wasn't able to hold the rope, but did Batman seriously catch it just by flying into it? Maybe it's a no to the '89 movie, but I'm not getting the logic there. During the fishing scene, there's one panel in which Damian is wearing headphones. Seems like a small error. Also, Killer Croc can see better in the dark? I know he tends to lurk in the sewers, but, unless I missed something, I didn't think that was one of his abilities. I know crocodiles do, but I thought Waylon just has a rare skin condition?

Question: If Damian's powers are fluctuating and Batman's aware there's some serious trouble with them, why not bring his son into the loop with all of the information he's gathering? What if he loses control of flight instead of just strength next time? Maybe he just sees how much his son is enjoying the powers and wants to let him enjoy them while they last?

BATMAN AND ROBIN #39 is a good time. It doesn't feel like anything big is brewing on the horizon and it may not have any truly standout moments, but it's a nice example of how well Tomasi can write Damian and certainly proof that the art team does a great job with the kid's expressions and the various locations. It's looking like the next issue has the potential to be a huge amount of fun, so hopefully the capitalize on that potential. Oh, and is anyone else wondering when we'll see Talia again?

Robin team up with Justice League is absolutely homage to Superfriends :)

Cannot wait for Super Damian, Billy and Superman all kick ass and use their full power

It was nice to see Captain marvel acting less rude. He's still kind of annoying and not quite where he should be, but I like to focus on the positives, and this is an improvement that I greatly appreciate.

As for the rest of the issue I really enjoyed it, and as always Tomasi writes a really good Damian. I especially like the fishing scene, Damian with the Bat Signal, and Damian unofficially joining the League.

It was a fun and enjoyable issue... one that left me smiling and looking forward to the next issue...

still amazed how much they've made Damian likable over the series.... Really hoping to the DC animation can steer Damian in the right direction too...

Did anyone else notice when Damian got Billy to say "Shazam" but nothing happened? It's like the writer wrote the dialogue in that scene to look like Damian tricks Billy into saying his name so the conversation would end up being kid-and-kid but then they forgot they were gonna go that route and scrapped the idea

Probably the funnest and funniest issue of their entire run.

@the_average_bear: Yeah, that's another thing that sucks about this new rule that he has to think good thoughts while saying the word.

Dont get why he took the bat-signal. I can't wait to see him interact with wonder woman, also WW and BM had an amazing scene in this weeks WW book I suggest everyone one to read it, it was beautiful.

@the_average_bear: It happened twice not only in this.

Decent issue, good look at the character of Damian and how he interacts with everyone. Now the series needs to move forward quickly though with actual plot. Like you said, we need more Talia and Ra's.

@justice_teen: I think he did it to scare criminals.

Eh very light on actual content,satisfactory but I expected more.

I absolutely loved this issue! And the review was just as awesome!

I'm going to miss this series when it ends

Did anyone else notice when Damian got Billy to say "Shazam" but nothing happened? It's like the writer wrote the dialogue in that scene to look like Damian tricks Billy into saying his name so the conversation would end up being kid-and-kid but then they forgot they were gonna go that route and scrapped the idea

Well he's said Shazam before while introducing himself, so I think the transformation is kind of like the spells in Zach Bell, it only works if you say it like you mean it. Not just Shazam, but

am i the only one waiting for/hoping damian loses his powers soon? its just not his style... 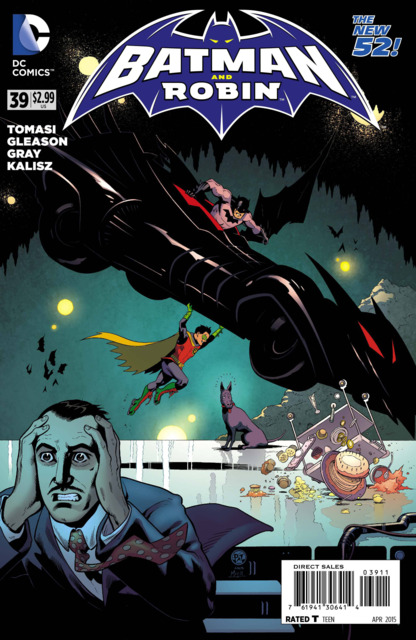