You can't have a Villains Month without Ra's al Ghul. James Tynion IV reminds us who he is and what he's up to during the time of FOREVER EVIL.

Ra's al Ghul can be a tricky character to use. He's such a great character and because there have been some epic stories involving him, overuse can easily become a problem. The other concern is what kind of story would we get in a Villains Month issue since some issues have been simple retellings of their origins. That is not the case here.

James Tynion IV does a great job in incorporating a very brief origin story along with showing us where Ra's stands in the FOREVER EVIL climate of the DCU. With the New 52, there are still some questions who these characters might be now and we get to see the essence of who Ra's is and what he's capable of. He also shows us when Ra's gets an invitation to join the Secret Society.

Jeremy Haun's art captures the story's pacing nicely. There is a mix between flashbacks and the modern day and you can easily follow along between the different periods.

We get an interesting story but some of it plays as more of a tease or way to promote Ra's al Ghul in RED HOOD AND THE OUTLAWS. It's not really a bad thing but almost feels too much like a set up issue.

John Rausch's colors were good but there were moments they made the backgrounds look too sterile and clean, especially where Ra's was hanging out.

Ra's al Ghul has been relatively quiet in the New 52 and it looks like he's ready to make a move. James Tynion IV fills us in on some past moments of Ra's life while also pushing the character forward into the FOREVER EVIL landscape that has exploded onto the DCU. This issue does set things up for Ra's appearance in RED HOOD AND THE OUTLAW and you'll want to see what he has planned next. Jeremy Haun's art captures Ra's essence and you get a nice visual interpretation of what he's all about. Ra's al Ghul is done sitting around and it looks like James Tynion IV has some big plans for him. 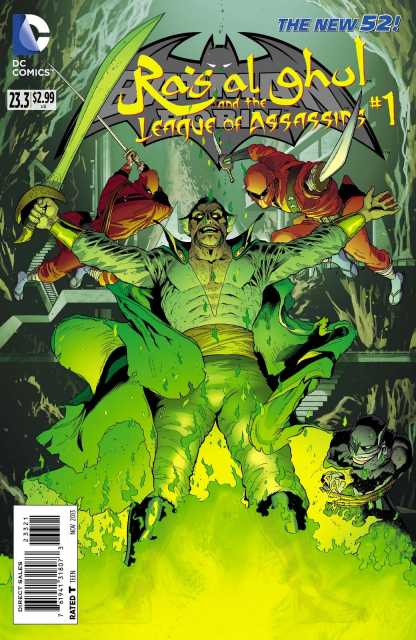