In case you've had a hunger for more on the Court of Owls, sit back and prepare to witness the Court throughout different time periods.

The Court of Owls did something not many have been able to do. They did quite a number on Batman. Batman felt he knew everything there was to know about his city. At a young age he looked into the possibility that the Court existed, on more than one occasion. He was unable to find anything and refused to believe they actually existed. He was wrong. Big time.

As James Tynion IV has been delivering bits of their history in the pages of TALON, here, we get to see even more. With every small piece he's shared before (along with what Palmiotti and Gray have done in ALL-STAR WESTERN), I've wanted to see more. That's what we get here. Seeing the Court in different time periods is just what I wanted to see.

Jorge Lucas' art is something here. He tweaks his style a little for each period and I especially noticed how fitting it was in the 1974 segment. His style along with Dave McCaig's colors really captures the darker feeling the story calls for. There are indeed some dark and creepy moments.

Jumping around from time period to time period might be a bit much. It's interesting to see glimpses into past periods which cut to the present since they provide some cohesion to the overall story. You just have to get a handle on it.

I'm not a big fan of the Gotham Butcher character. He does do something impressive here but something about him just doesn't jive with me.

With many of the Villains Month titles, there hasn't been too much appeal or opportunities to actually see new information. Most have been re-tellings or continuations of other stories. With a book containing the Court of Owls, there's still a lot we don't know. This secret organization that was able to bring down Batman is ripe with opportunities for more stories. James Tynion IV gives us a taste for the Court's action during several different moments in time. Jorge Lucas' art nicely captures the different time periods by making sure each feels like it's taking place during that time. This issue almost feels like a tease for more stories set in the different periods. James Tynion IV simply makes me want to read more of the Court and their history. It's always great when a superhero comic focuses more on the story over than cheap action shots. Let's hope we get to see and find out more about the Court of Owls. 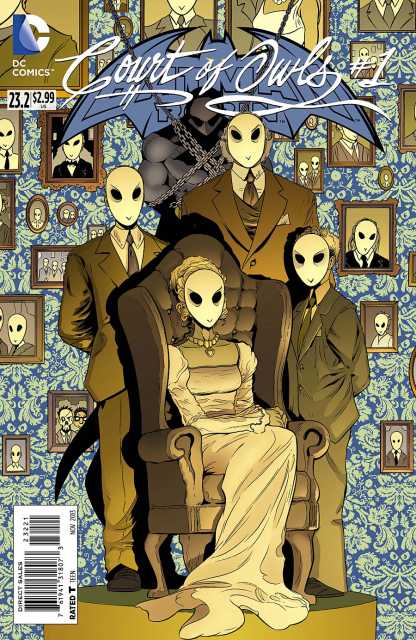