Will Two-Face join the Secret Society?

What would Harvey Dent do if Gotham was falling apart and Batman was nowhere to be found? He'd flip a coin to decide what to do, of course! That's exactly the premise for this villain's one-shot and I must admit, it's a pretty amusing turn of events.

Writer Peter Tomasi skips covering the character's backstory and just dives right into the current events that are flooding into the DC universe. There's no recap of how he came to be or why he does what he does. Instead, Tomasi does an able job providing Harvey's conflicted voice and mentality. I've never been particularly fond of the character and I could see this shtick getting old fast, but for just one issue, it works quite well. What follows is a rather twisted and bloody course of events which ultimately lead to revealing where Harvey will stand in the upcoming big event.

Guillem March and Tomeu Morey do a fine job bringing Two-Face's deformed side to life. It's not too disturbing, but it's just grotesque enough where I found myself gazing at the details -- especially his eye and oh-so-lovely lips. It's also interesting how the scenes focusing solely on his character are filled with shades of grey, black and white -- much like the character himself. Then, when things take a violent turn, the pages are filled with more color, helping to illuminate the chaos taking place on the pages.

I understand the reasoning behind randomly include snippets of Harvey's past, but for me, all it did was take away from pacing and didn't really add any extra emotional weight or depth to the moment. It was too brief to really care about the various tragedies Harvey's casually strolling past.

Also, it's worth noting that people who don't follow big events are going to be in the dark. There's no kind of intro or recommendation to read FOREVER EVIL #1 first. Instead, we're just hit with a few abrupt captions. I'm okay with this since I know how the event kicks off, but if you stray away from big events and just follow a few titles, you'll definitely be asking at least one major question.

Minor gripe: I would have preferred if the opening page wasn't broken into five panels.

If you're a fan of Two-Face or at least curious about the character, I'd recommend giving this a shot. It's not a very elaborate look at the character and doesn't bother to expand upon his history, but it does manage to offer a pretty entertaining story and decent insight into how he operates. Sure, we all know he flips a coin to make up his mind, but this illustrates the measures he'll take after the coin has landed... even if he thinks he's being a good guy. 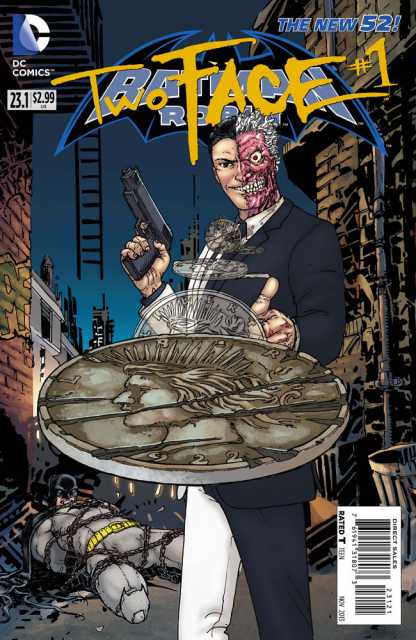