More on the aftermath of the death of Robin. Plus the introduction of Carrie Kelley. How does she fit into the story?

In a continuation after last issue, we're still seeing Batman deal with the death of Robin. As the title suggests, we are seeing him in the different stages of grief. He's not out beating the crap out of everyone in sight. Peter Tomasi gives a bunch of little subtle signs showing just how Bruce is dealing with his loss as the story progreses.

As this happens, we get the New 52 introduction of Carrie Kelley. Her reason for being here may not be as obvious as it seems but it does play a part in Bruce's handling of the situation.

Tomasi takes the story in an interesting direction. It's a bit of a risk in seeing the full extent of what Batman is willing to do next. This results in a confrontation with Frankenstein, a character you wouldn't expect to see here. The handling of Alfred is almost enough to make you wish the title is changed to BATMAN AND ALFRED.

Patrick Gleason continues to put his mark on all the characters that appears. Carrie Kelley seems like an odd choice to have in the comic but Gleason makes it work. His depiction of Bruce's scowl also speaks volumes. Then again, if you read last month's silent issue, this should not be a surprise.

Batman's plan and the involvement of Frankenstein feels a bit odd. I'm not sure what the status of Lazarus Pits are in the New 52 Universe but that seems like it would've been a more logical decision. We are seeing Batman make do some things deeply out of character. It can be attributed that it's a result of his loss but we've never seen him make this sort of decision before.

With Red Robin being part of the title, it would have been nice to see him have a bigger role in the issue. You could almost say Carrie Kelley put in more of an appearance. Also, maybe I missed it but I was unaware that Tim had a "Titans jet" available.

It's a little unclear why Carrie Kelley was specifically chosen to appear in this issue. It does open the door to seeing more of her character in the future but the sudden appearance feels like it was a last minute decision.

Peter Tomasi continues the portrayal of Batman dealing with the greatest loss. We've seen Batman deal with loss before so it's great to see Tomasi actually putting him through the different stages. He also makes a bold move in having Batman take some extreme actions in trying to cope with it all. It's a little unsettling but that could be the point in seeing just how far he's willing to go. Patrick Gleason's art is top notch as usual. He manages to capture the mood and atmosphere of the characters in just the right fashion. Carrie Kelley is an interesting choice. Hopefully we'll see more development with her rather than this just be a stunt. More Red Robin would have been nice considering he is part of the title of this issue this month. The status of the Dynamic Duo may be up in the air but Tomasi and Gleason continue to prove the are a Dynamic Duo when it comes to comics. 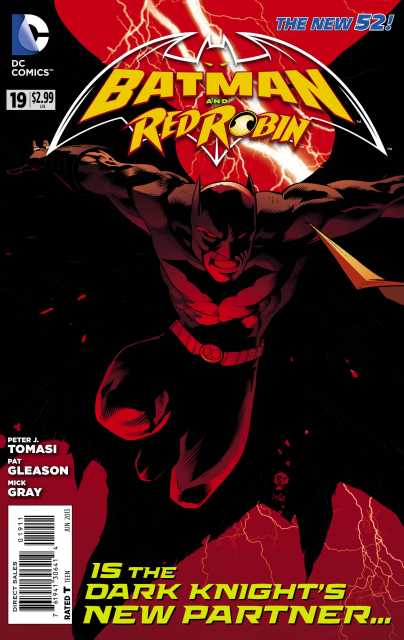